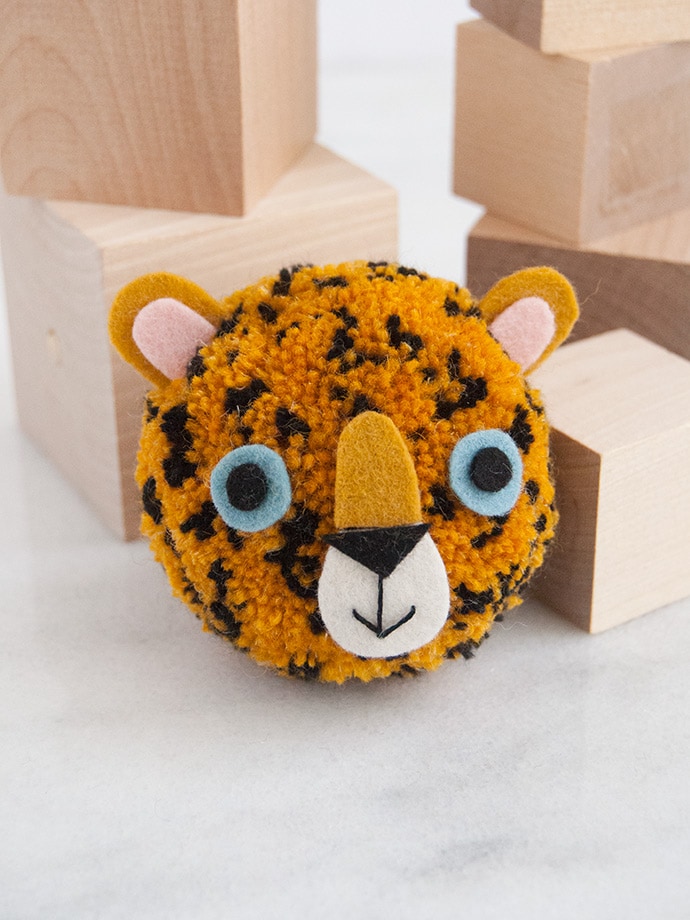 Today we’re sharing part three of our new pom pom series with our friends from Purl Soho! Each pom pom is inspired by an endangered animal and today we’ll be crafting this beautiful Amur leopard. The pattern may look intimidating at first, but the technique is so simple, we promise! Keep reading for the full instructions. 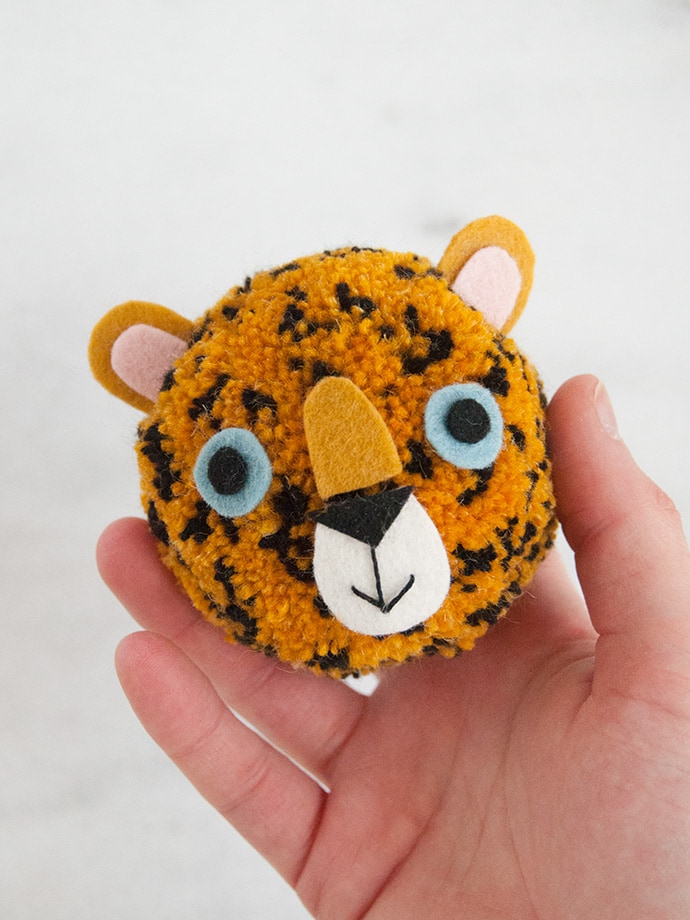 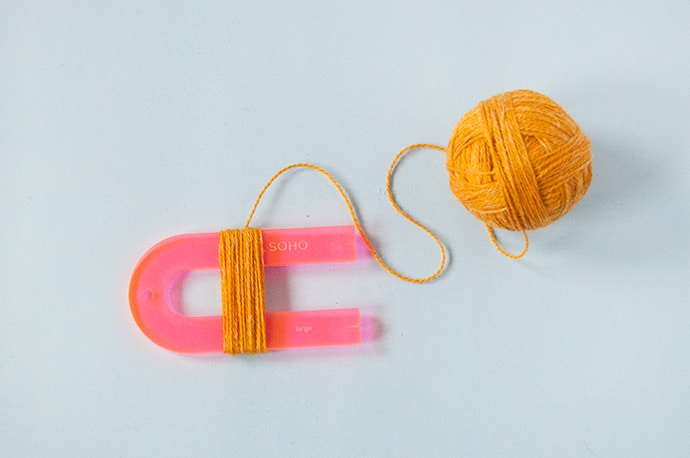 Step 1
Start by winding your skein of Linen Quill and Line Weight yarn into balls. If you’ve never done this before, take a look at Purl Soho’s tutorial on how best to do this – it’s easy! Once you have a ball of yarn, wrap it around the large pink pom pom maker that comes in the set, about 20 rotations. 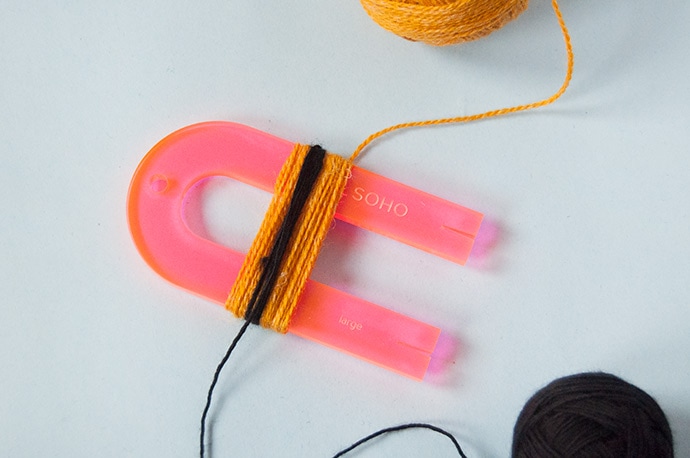 Step 2
Keep the tumeric yellow yarn attached for now, but wrap about 5 rotations of the black yarn on top of it. Trim the black yarn so that it’s no longer attached. 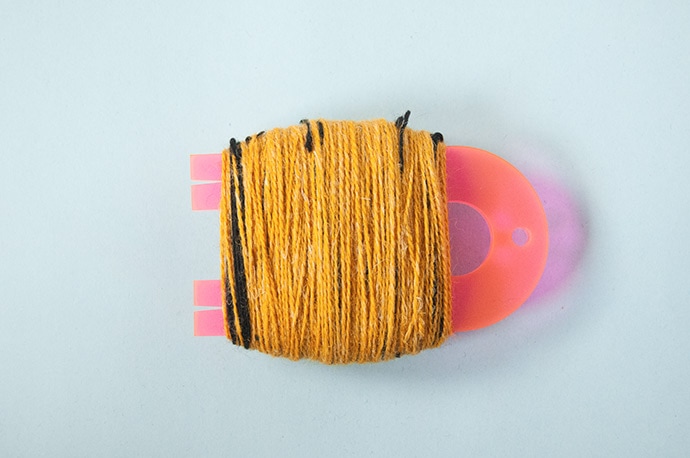 Step 3
Continue wrapping with the tumeric yellow yarn, adding in rotations of the black yarn as you go. Because both these yarns aren’t very heavy, you will want to have about 600-700 rotations in total. Since you’ll be alternating between yarns, it can help to keep a tally on a scrap piece of paper to make sure you don’t lose count! 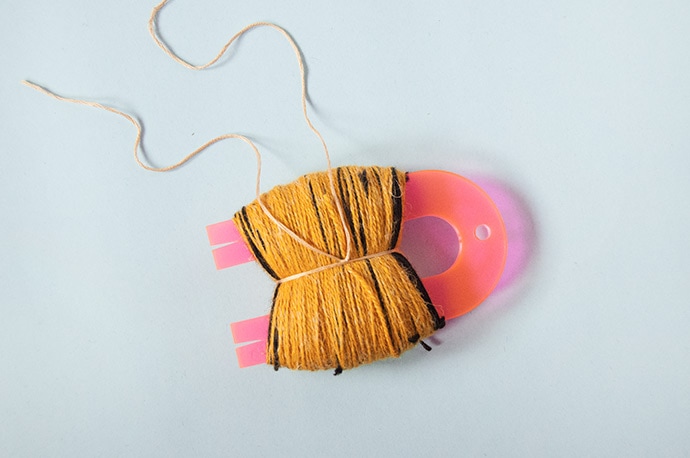 Step 4
Once you’ve wrapped all your yarn, cut an 18″ piece of embroidery thread. Thread one end through the U-shaped gap between the wrapped yarn and the pom pom maker. Bring that same end up and over the wrapped yarn and then back through that same U-shaped gap again. Bring the two end of the embroidery floss together and make sure that the horizontal threads are nice and centered on the yarn wrap. Tie a surgeon’s knot but wrap the end through the loop twice. Pull the knot together but don’t pull tight yet. 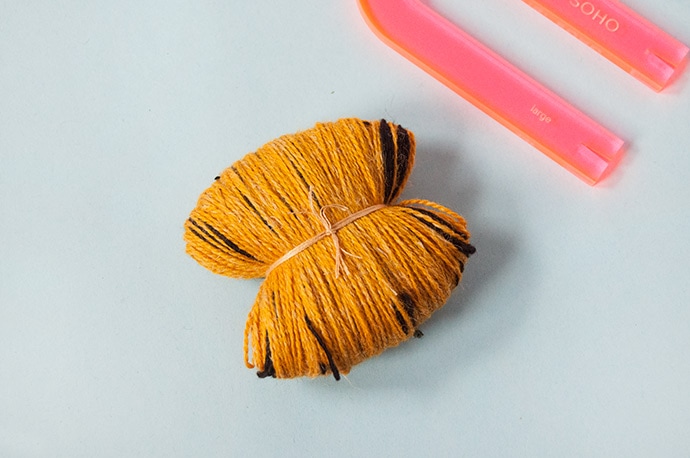 Step 5
Gently slide the yarn wrap off the end of the pom pom maker. Pull the embroidery floss knot as tightly as you can. Use a finger to hold the surgeon’s knot tight in place and then tie a half granny knot on top to secure. Bring both ends of the floss to the other side of the wrap (make sure to do this so that you don’t catch any loops of yarn along the sides) and then tie another tight surgeon’s knot, followed by another granny knot to secure. Make sure that these knots feel secure and very tight – a loose center may cause your pom pom to fall apart later. 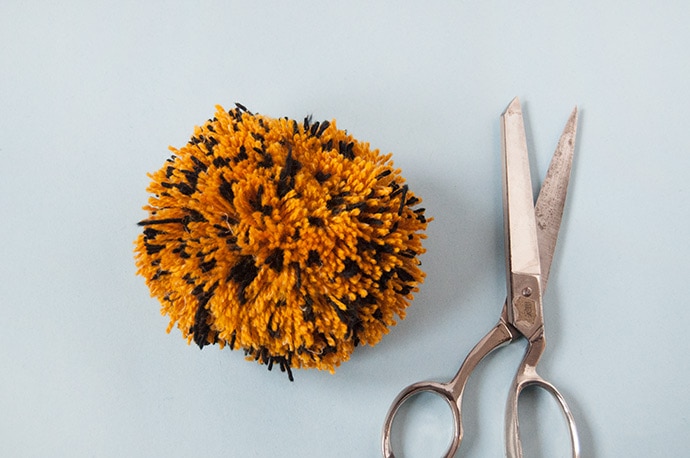 Step 6
Use sharp scissors to cut all the yarn loops. You’ll now have a large shaggy looking pom pom like this. Isn’t the leopard pattern cool? 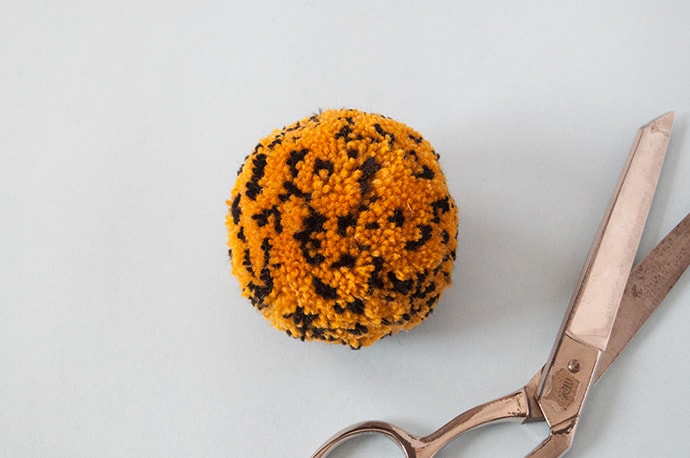 Step 7
Use your matching large pom pom guide to trim the excess yarn, forming a nice round pom pom. As you trim, fluff up the pom pom and reposition the guide on different sizes to make sure you have a good sphere shape from all sides. 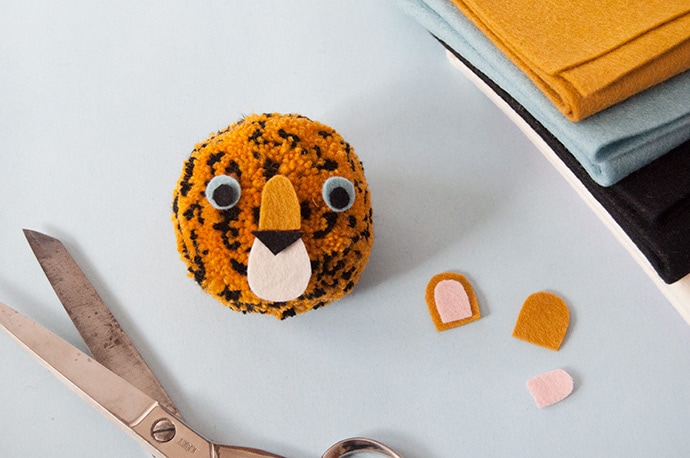 Step 8
Time to make a face for this Amur leopard! Cut two circles from the atlantic blue felt for the eyes, with slightly smaller black circles for the pupils. Cut an upside-down U out of butterscotch felt for the nose/snout and a teardrop shape without the pointed tip from white felt for the leopard’s mouth patch. A small black felt triangle with sit on top of the snout and mouth patch as the nose. For the ears, cut two U shapes from butterscotch felt and two slightly smaller ones from baby pink felt. 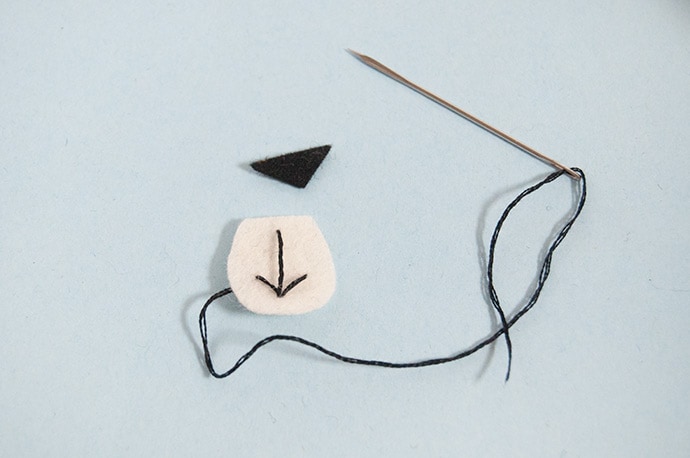 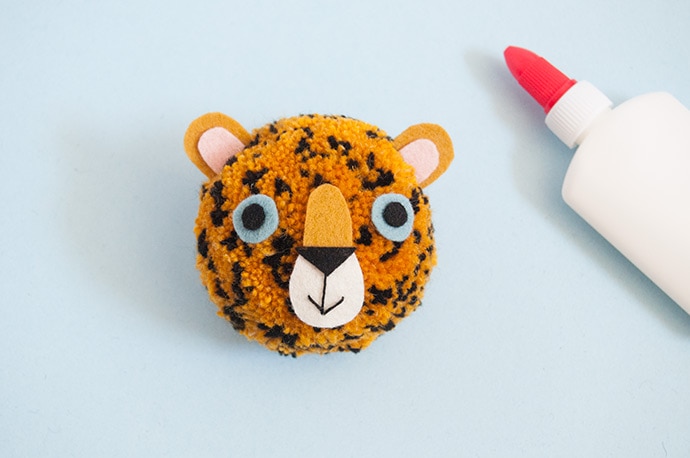 Step 10
Arrange all the features onto the pom pom and glue in place. When gluing the ears, insert them slightly into the pom pom itself so that they stand up nicely and the base of each ear is hidden by the yarn. Let dry completely. 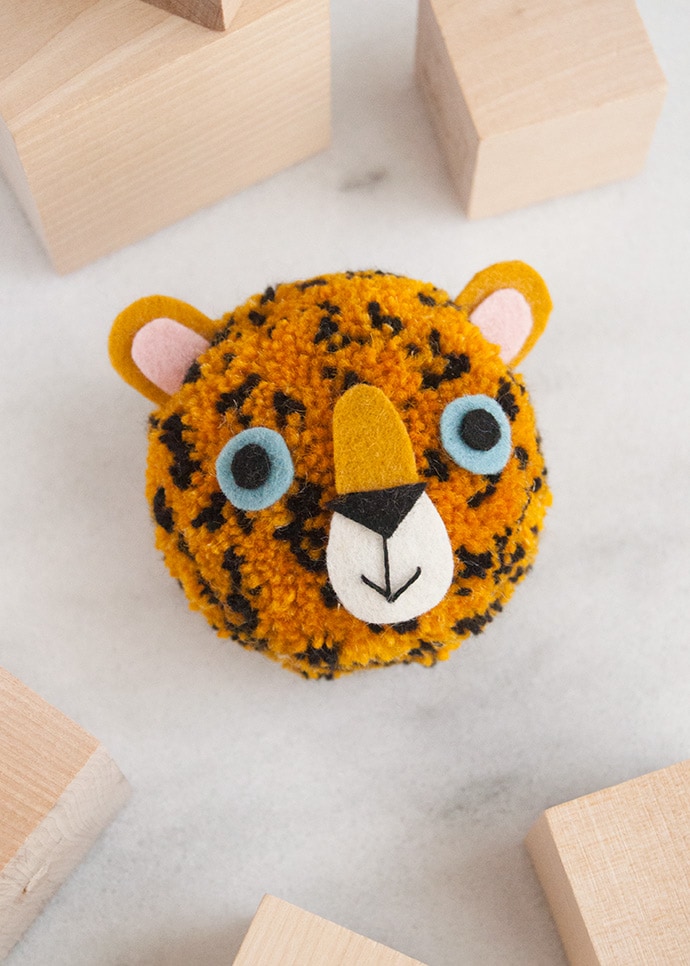 What will you name your leopard? Don’t forget to print out the tag (download above!) for some facts on the Amur leopard, and learn more here. 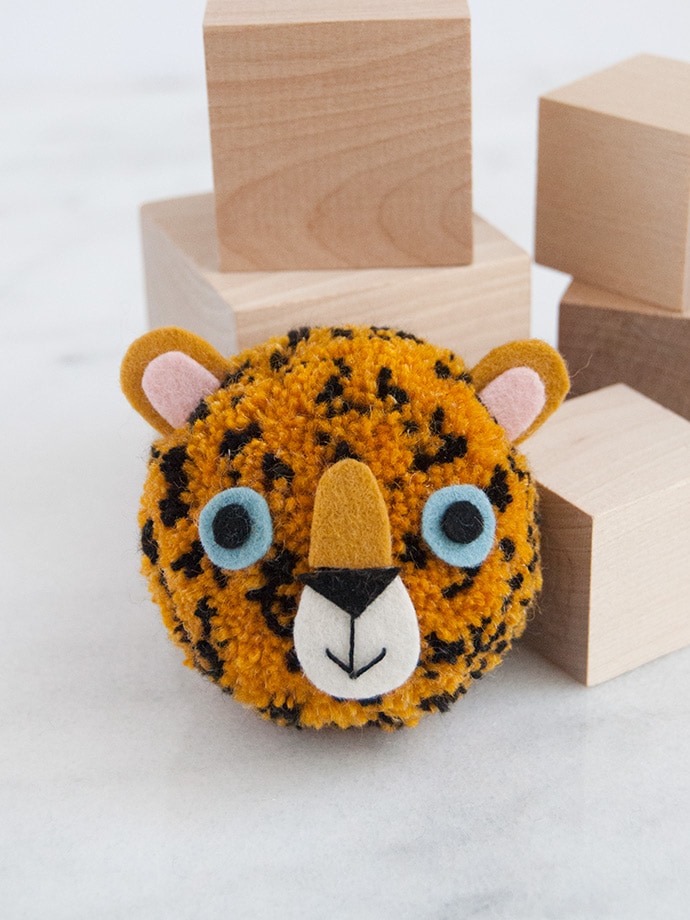 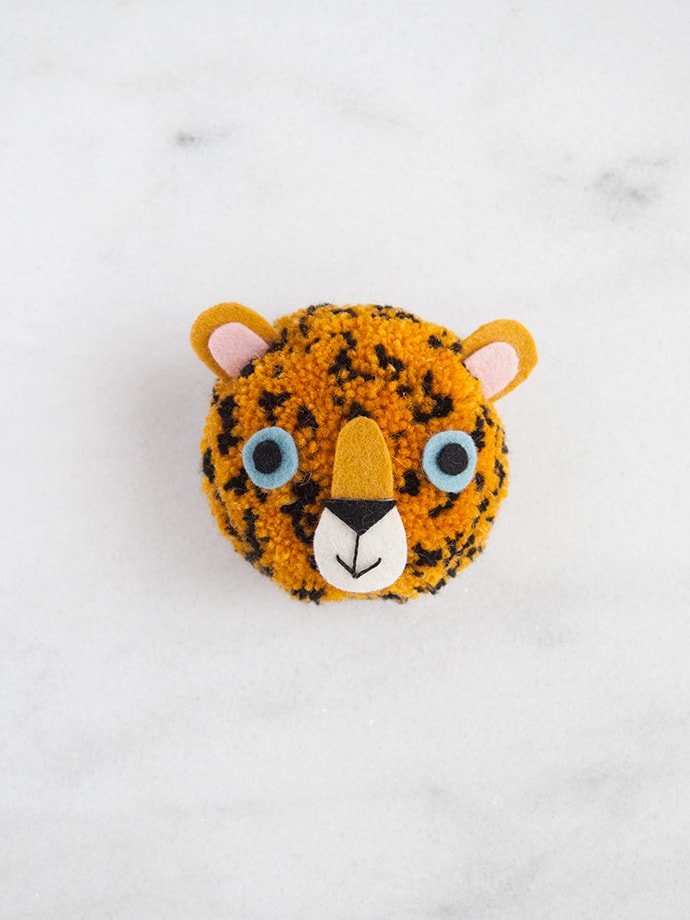