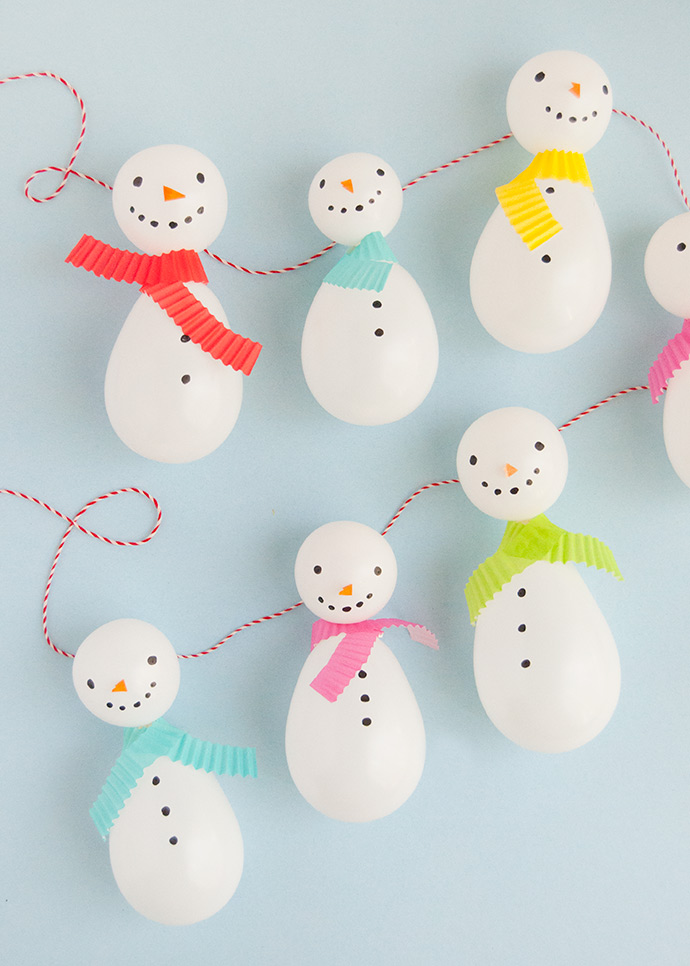 Do you want to build a snowman? Or how about a whole bunch and you don’t even need to have snow on the ground yet? These cheerful balloon buddies come together in no time thanks to balloons and cupcake papers. Add a string on their backs and you’ve got an instant wintery garland! 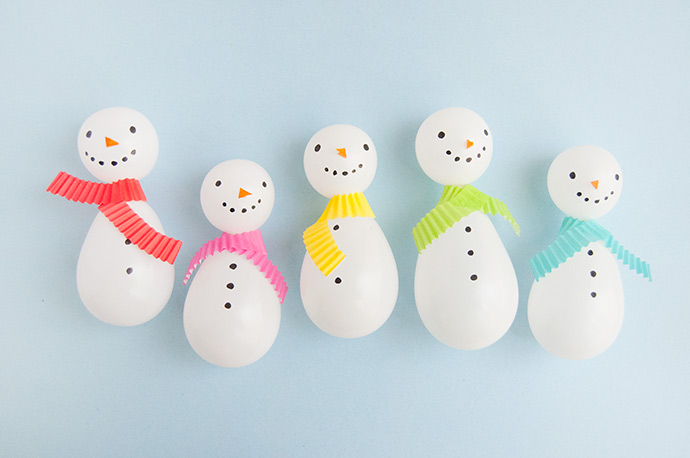 Balloons make the perfect garland because of how light they are – you can literally tape this up anywhere and not worry about it being too heavy! Or skip the garland altogether and let kids play with them around the house. No matter how to use them, we’re sure they’ll be happy to have a good home with you this winter! Keep reading for the instructions below. 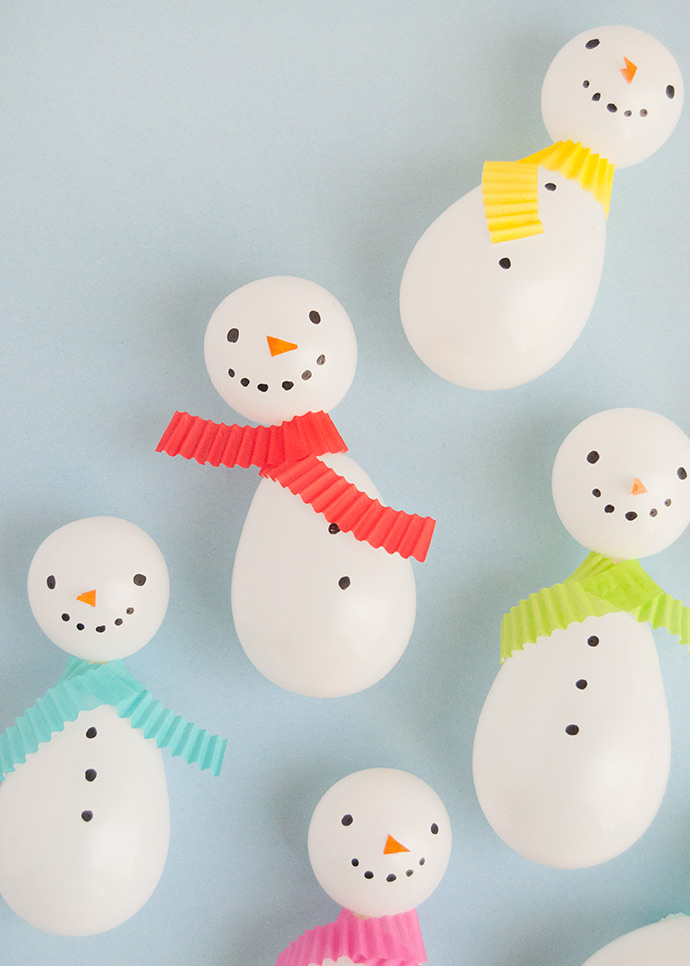 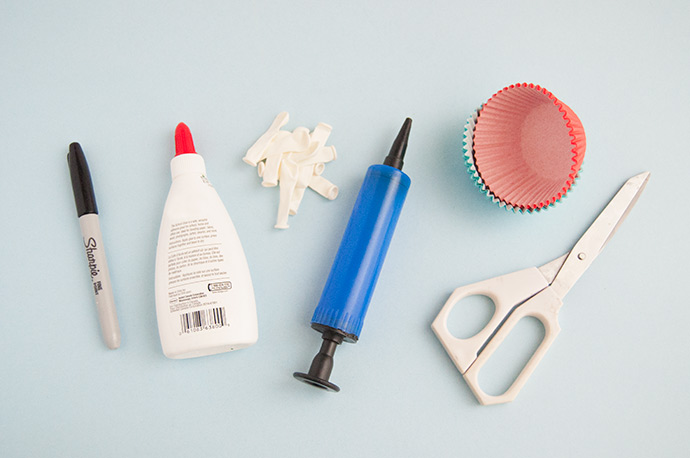 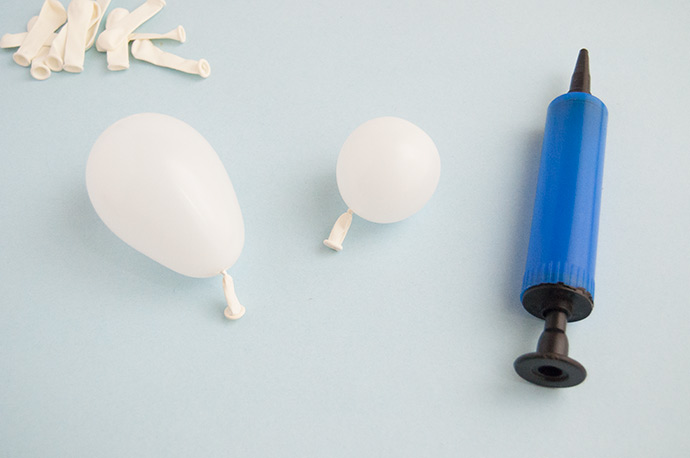 Step 1
Start by inflating two balloons. The one for the body should be a bit bigger and more oblong, while the one for the head should be smaller and rounder. Tie each off to secure. 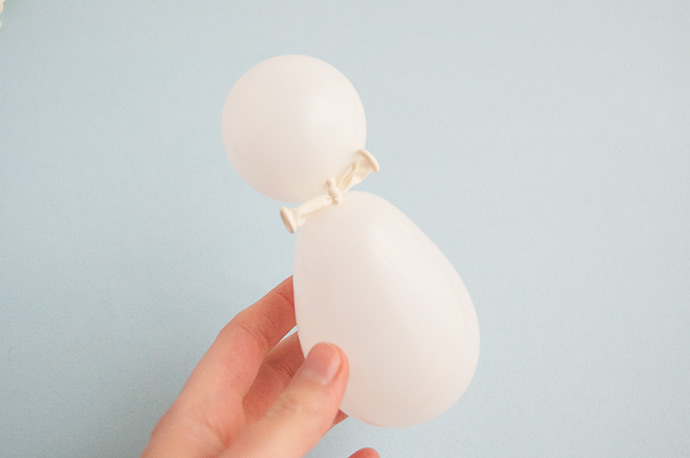 Step 2
Tie the balloon tails from each balloon together in a double knot, so that they’re attached securely together. Wiggle it around a little bit to get the balloons in a nice position if you find that that head is leaning one way or another. 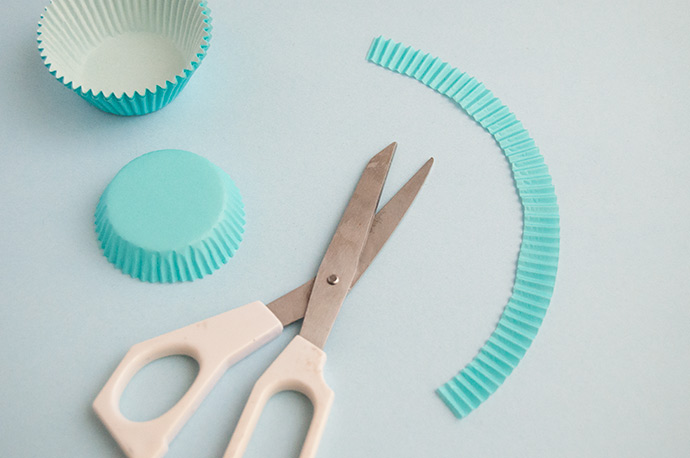 Step 3
Cut about half an inch off the edge of a cupcake paper to be the snowman’s scarf. You can use any scrap paper, or even felt or fabric for this, but we found that the cupcake paper was really nice to work with and shaped nicely. 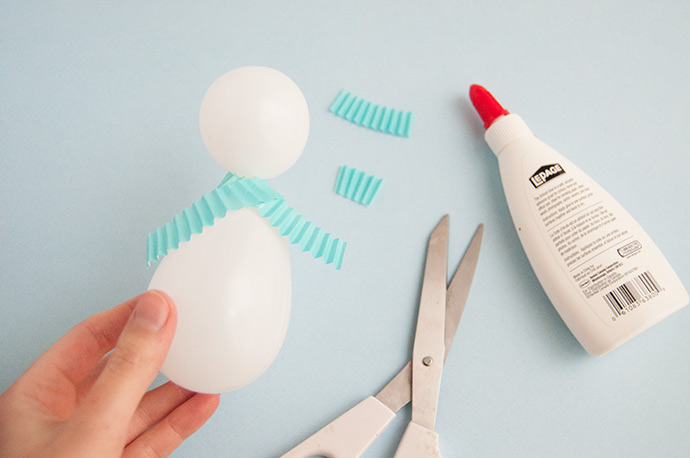 Step 4
Wrap the scarf around the join between the two balloons, overlapping them to look like a scarf. Use a small dab of glue to secure the two layers together, holding in place for a minute or two that they adhere together. Use scissors to trim off any excess paper if the scarf looks too long. 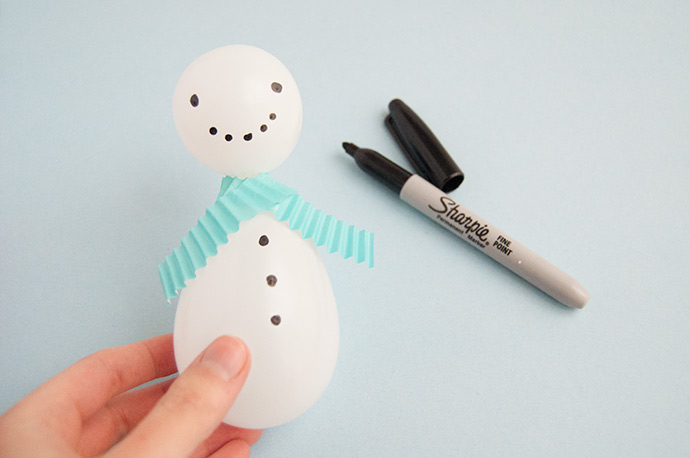 Step 5
Use a black permanent marker (a white erase marker also works well here, and would be a good option if crafting with little ones!) to draw three buttons on the body as well as eyes and a mouth on the head. 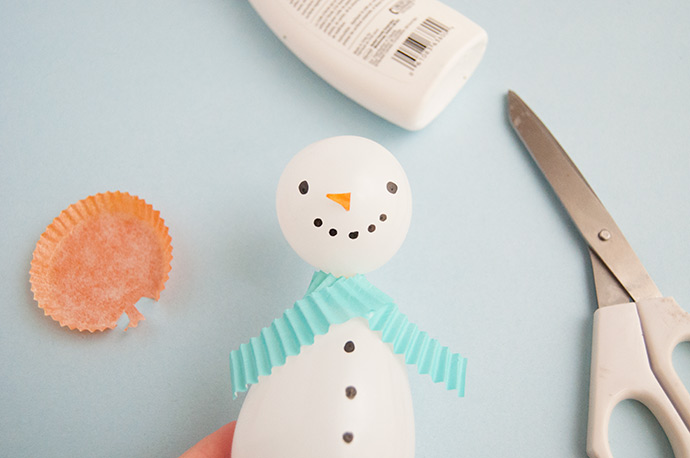 Step 6
Cut a small triangle from an orange cupcake paper with a tiny tab folded behind it. Apply glue to the tab and stick onto the face as a nose, so that it sticks out a little bit adding some texture. You can also draw on an orange carrot nose with a marker if you prefer. 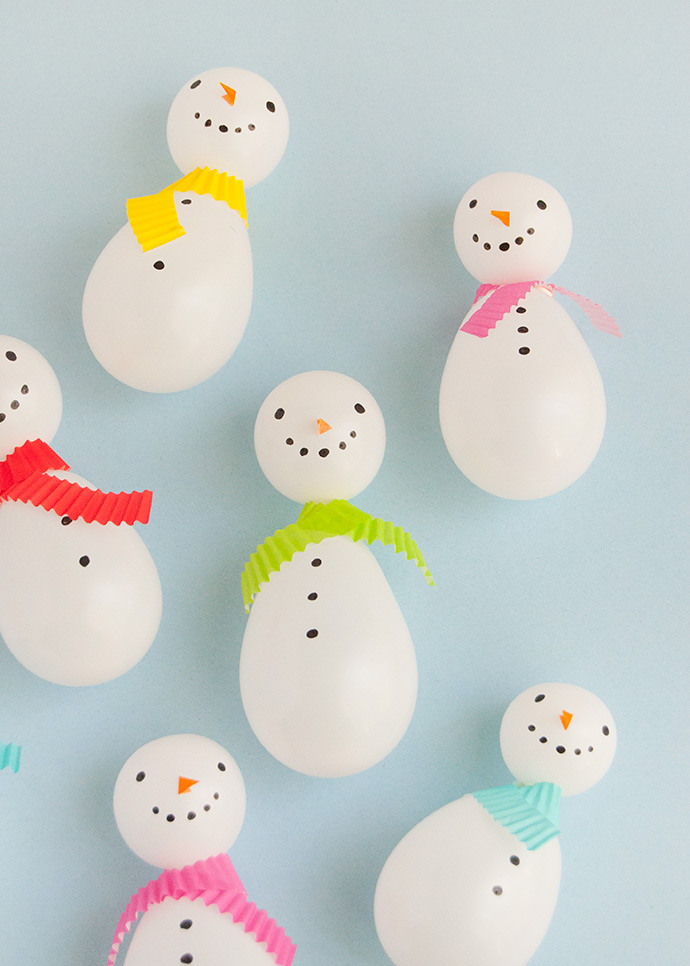 Repeat so that you have a whole crew of snowmen, using different colored cupcake papers for a whole rainbow of scarves. You can leave the snowmen as is if kids want to play with them (or tape a popsicle stick to the back to form a quick puppet) but you can also turn them into a wintery garland by taping a piece of string along the backs of their heads. 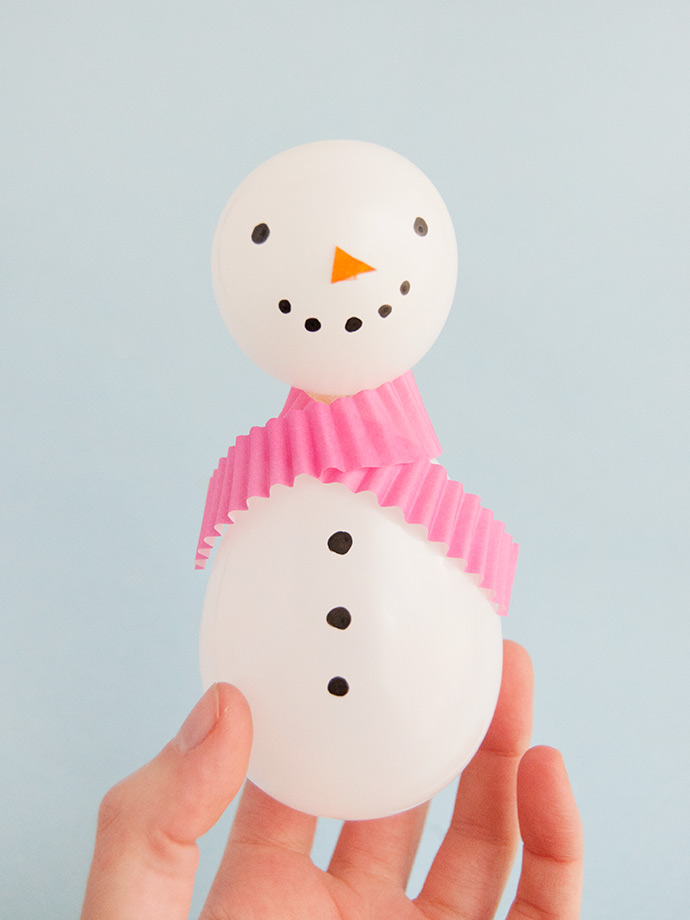 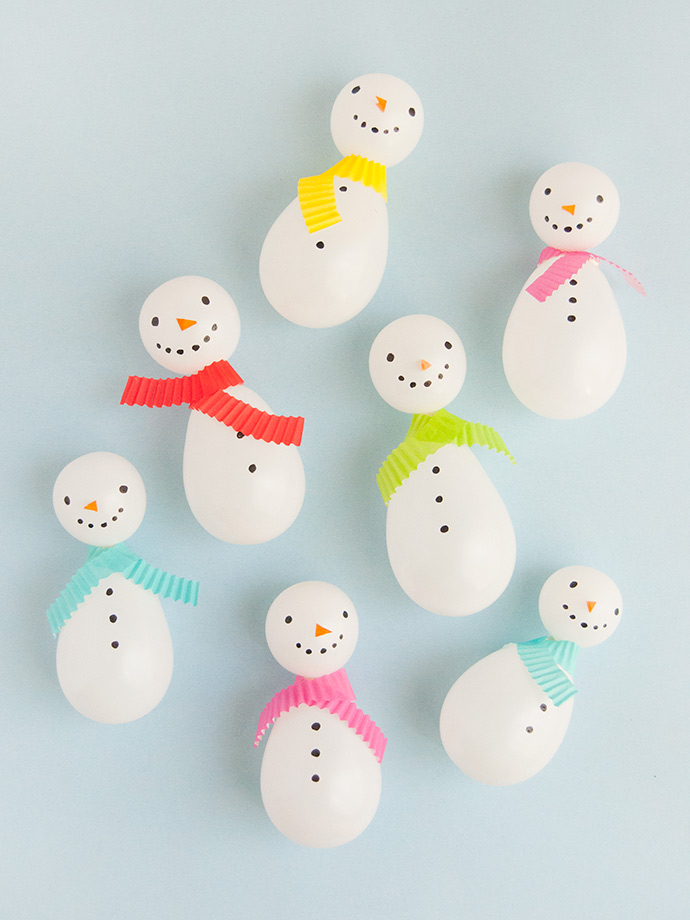 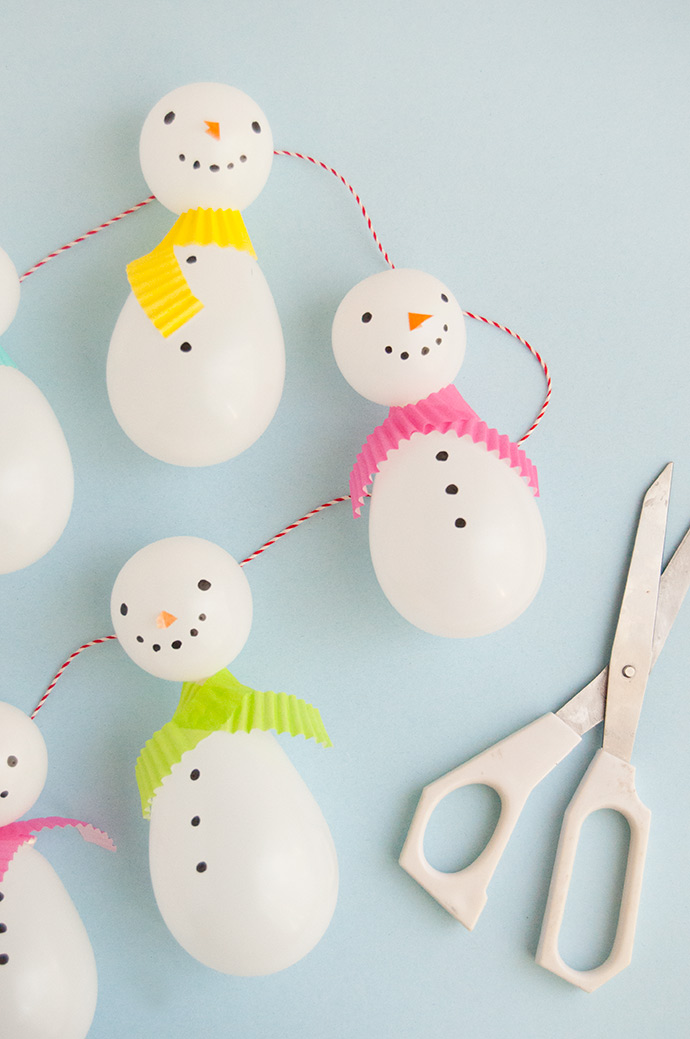