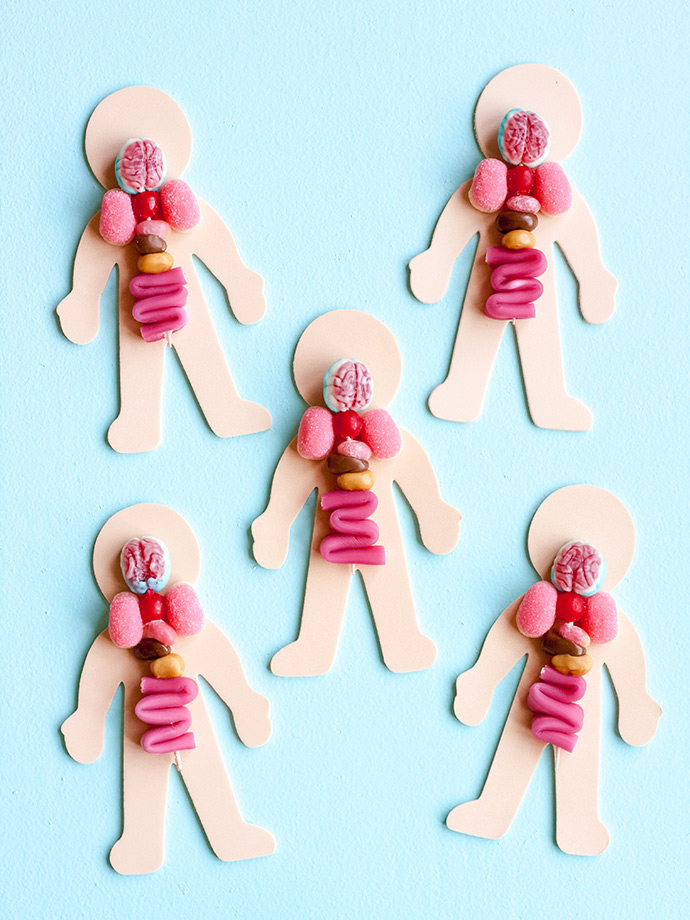 Ewwww! These body organ pops might gross you out just a little, but they’re delicious nonetheless. This would be the perfect Halloween party treat, and you can attempt to eeek out a little educational value for a class party! I imagine the science teacher would appreciate this body organ snack, and the health teacher might – if it were organ-ic! See what I did there? 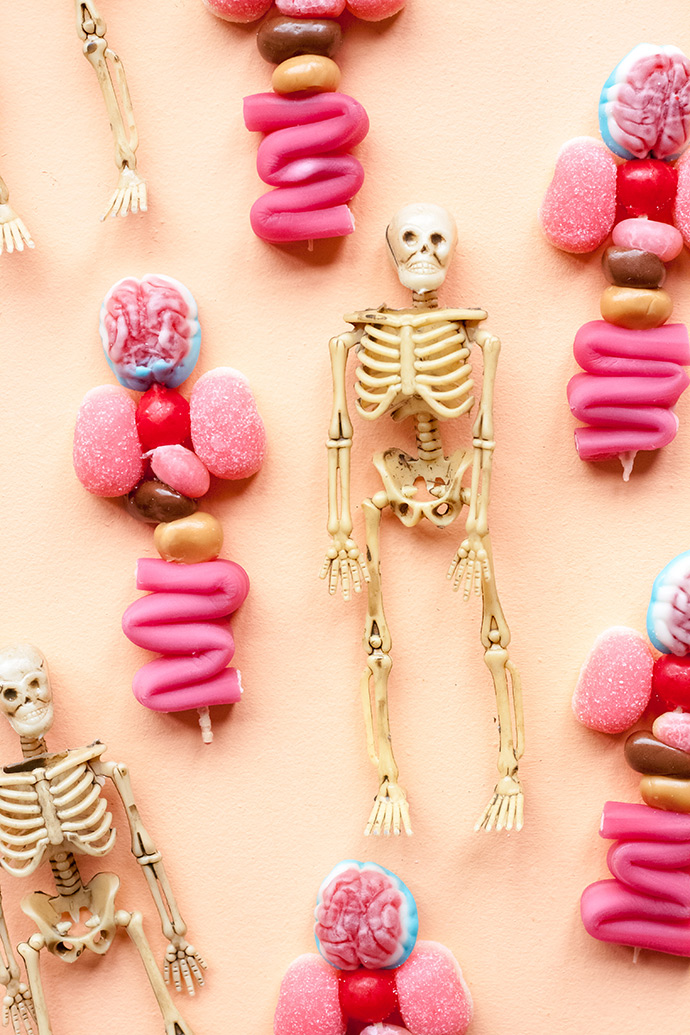 Most schools do not allow homemade snacks, but if you take the candy in its original packaging, the kids can assemble their own organ pops. You could also pass them out to trick-or-treaters, especially if you know the neighbors. Attach them to some foam people die-cuts, and on the back, write “Do you have the GUTS to eat this?” Muah-ha-ha!! 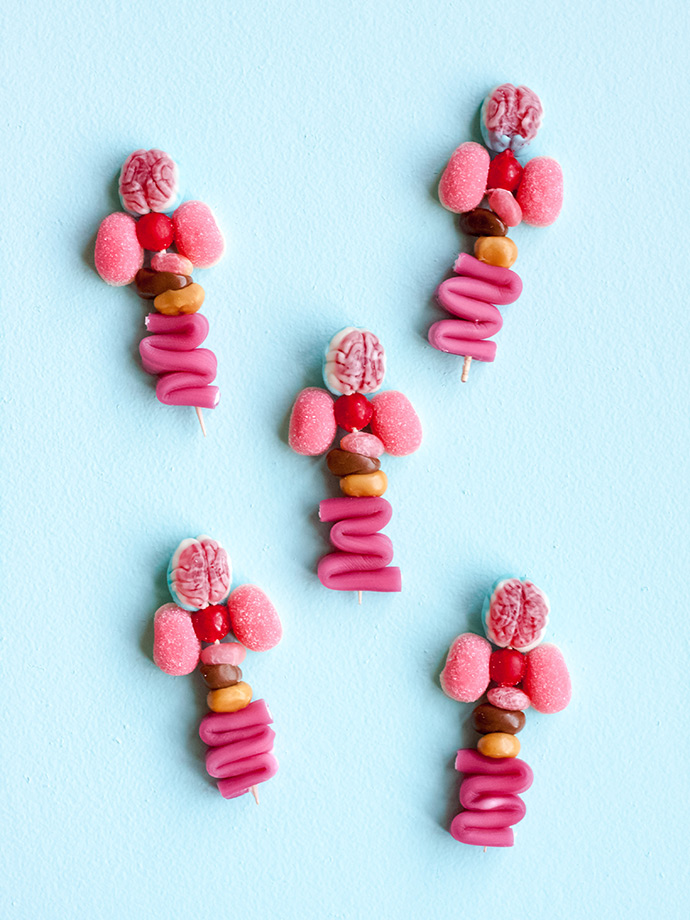 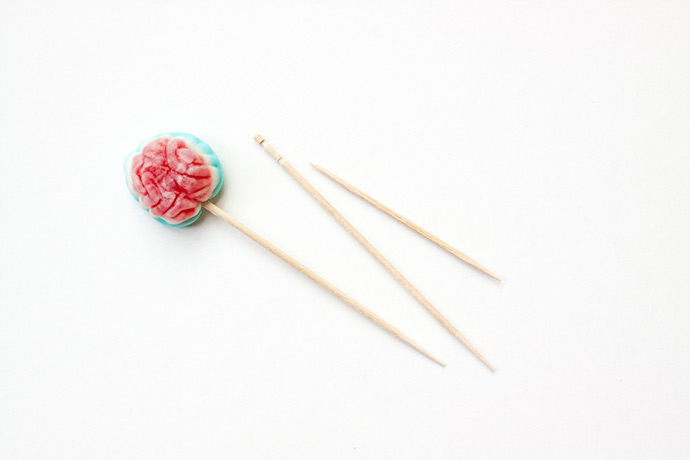 Step 1
Brain
Stick the flat end of the extra-long toothpick into the bottom of your gummi brain. 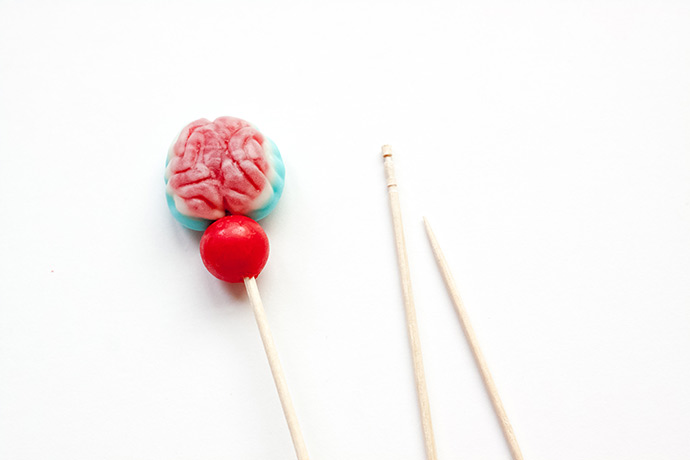 Step 2
Heart
Poke the pointy end of a toothpick through the Cherry Sour candy, and slide it all the way up the extra-long toothpick, to the bottom of the gummi brain. 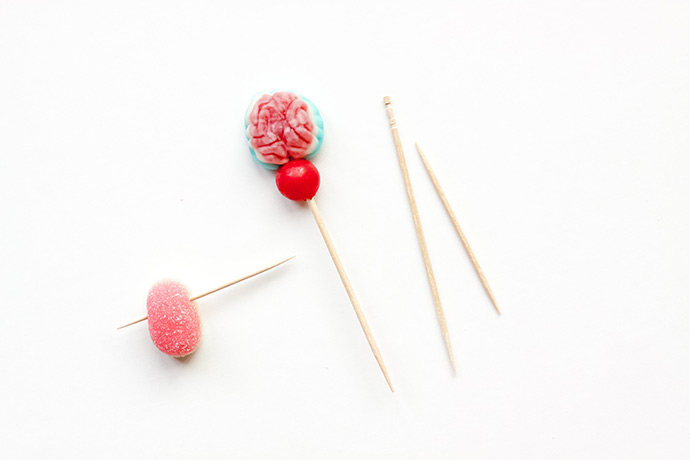 Step 3
LUNG
Poke your rounded toothpick through the skinniest end of a Trolli strawberry puff. Slide it toward the middle of the toothpick, so that just the pointy part of the toothpick is sticking out. 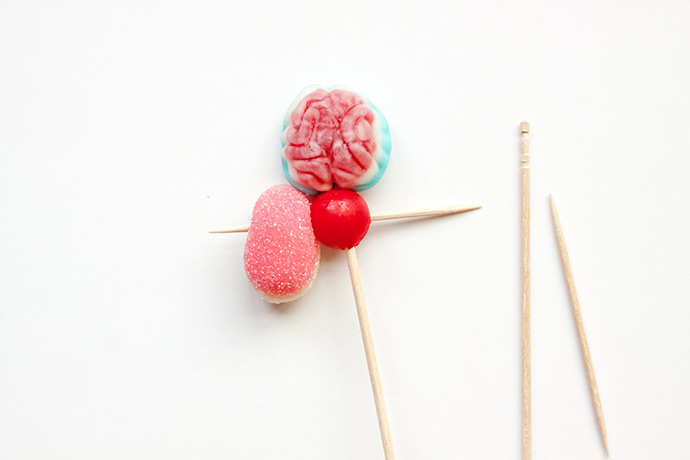 Step 4
Slide the other end of the rounded toothpick through the side of the Cherry Sour candy that is attached to the extra-long toothpick. 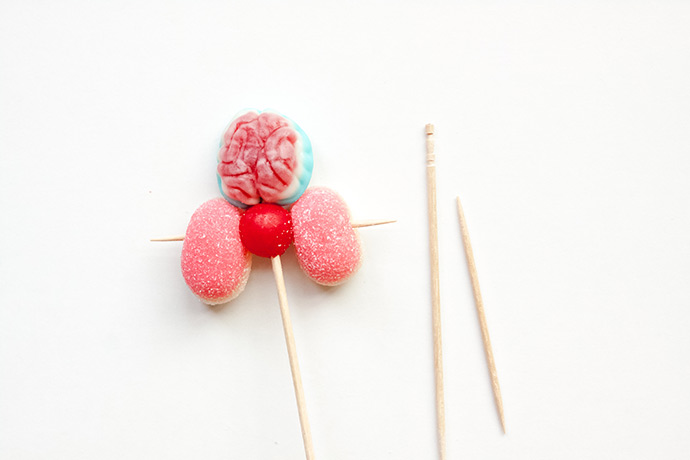 Step 5
Lung
Slide a second Trolli strawberry puff onto the other end of the rounded toothpick so that there is one on each side of the Cherry Sour. 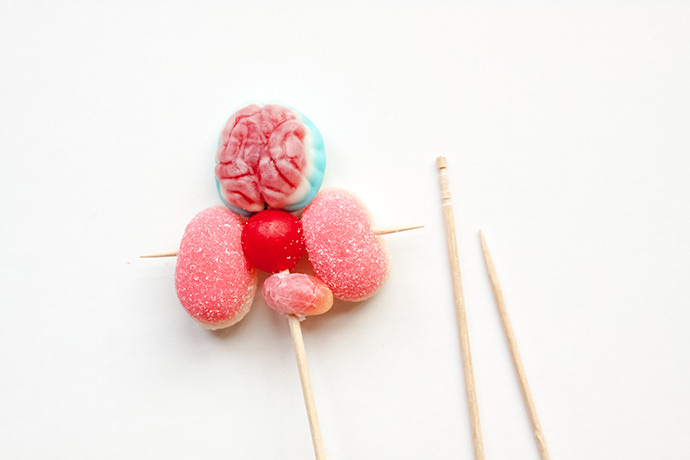 Step 6
Pancreas
Slide the top of a Trolli Sour Brite Egg (pink) onto the extra-long toothpick, so that it is on its side. Slide it up the pick until it is touching the cherry sour on the bottom.

Step 7
Liver
Roll a piece of Tootsie Roll into a small egg shape, and slide the skinny end up the toothpick, until it touches the Sour Brite Egg. 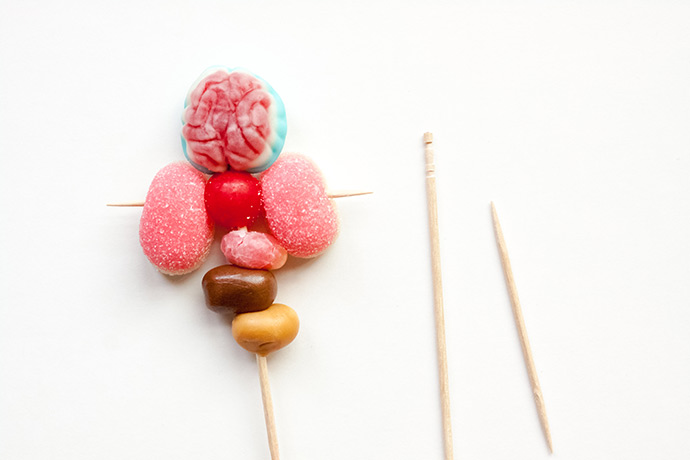 Step 8
Gallbladder
Roll a piece of caramel into a slightly smaller egg shape, and slide it up the toothpick until it touches the Tootsie Roll. 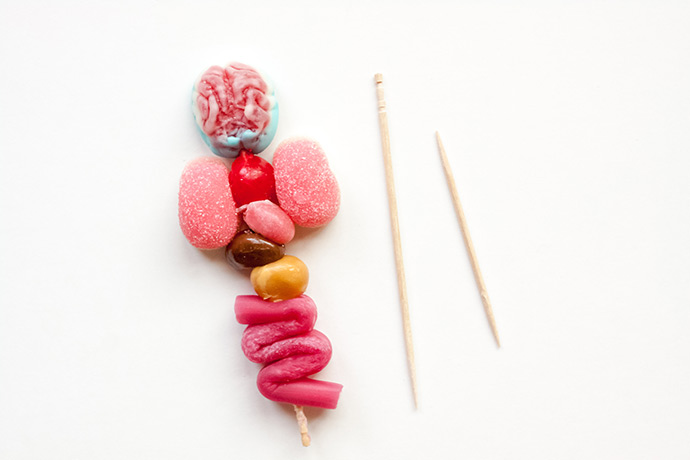 Step 9
Intestines
Warm a Tangy Strawberry Sweet Tart Rope in the microwave for about 10 seconds. Fold it back-and-forth about 3 times, and slide the folded candy onto the end of the toothpick. Be sure it remains folded. 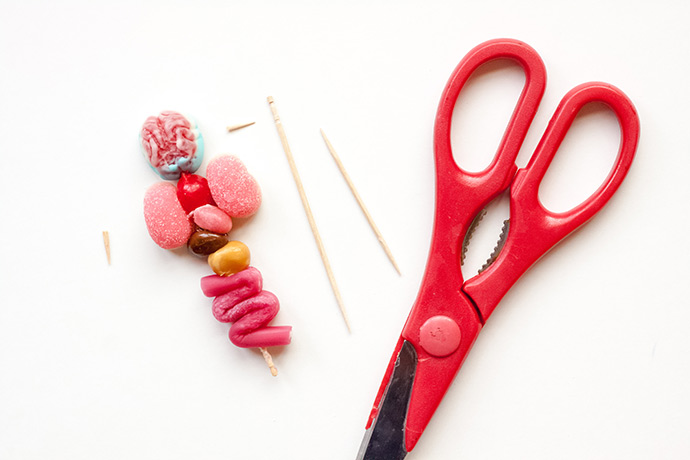 Step 10
Use scissors to snip off the pointy ends of the rounded toothpick that may be sticking out on each side of the Trolli Strawberry Puffs. 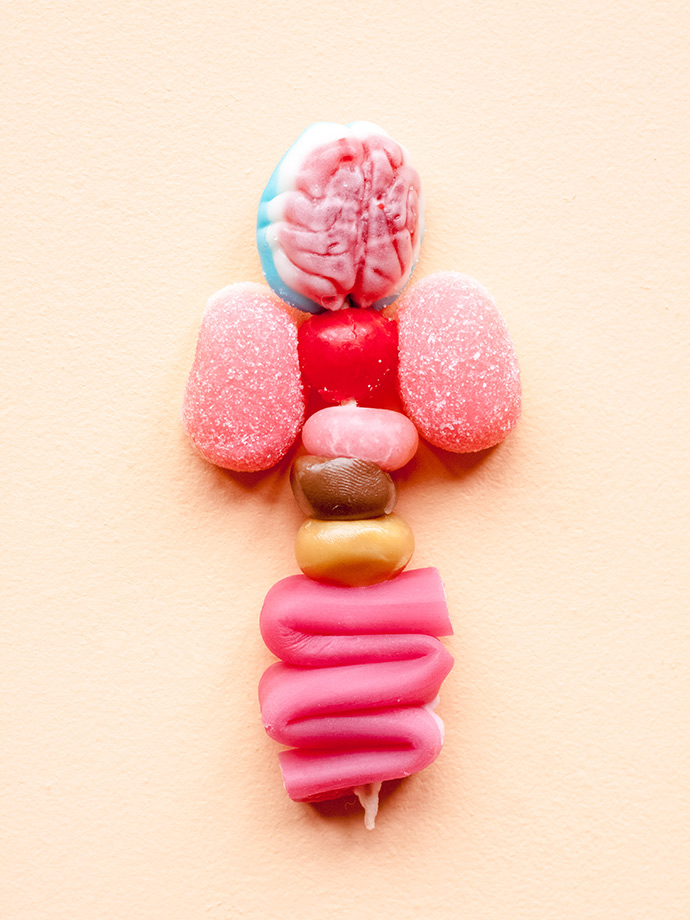 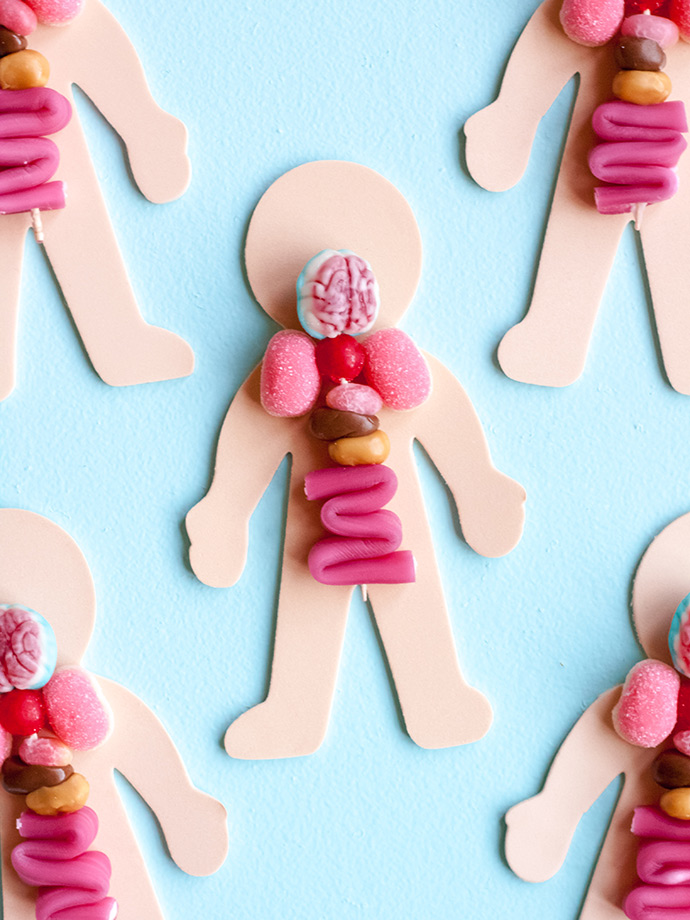 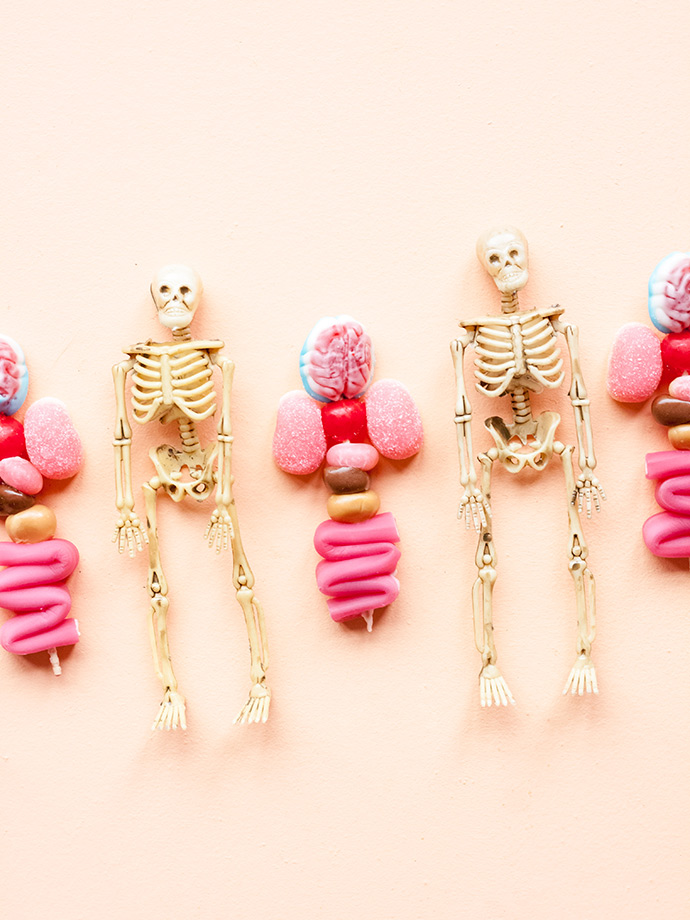 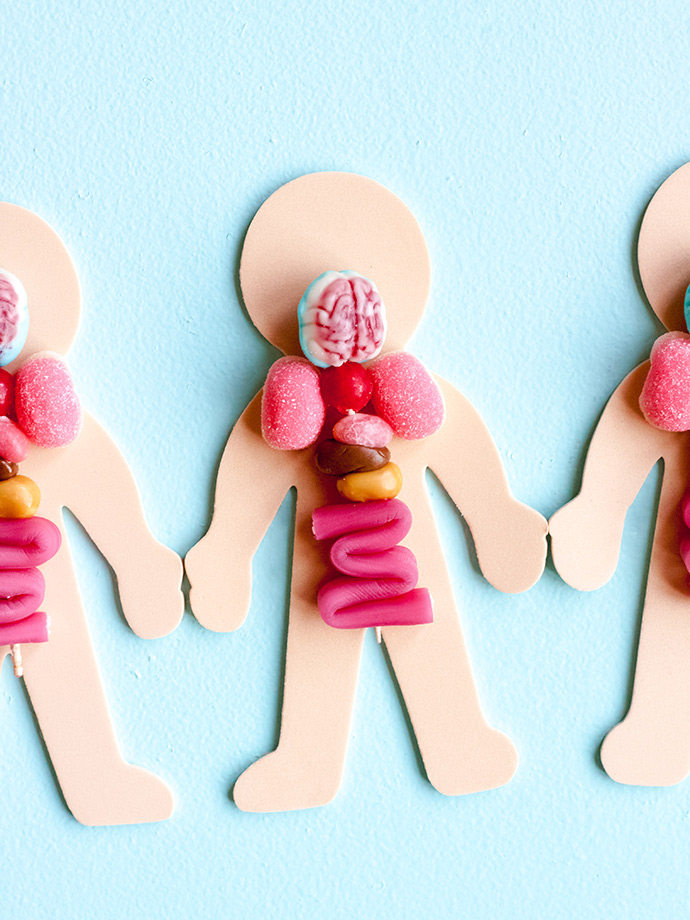 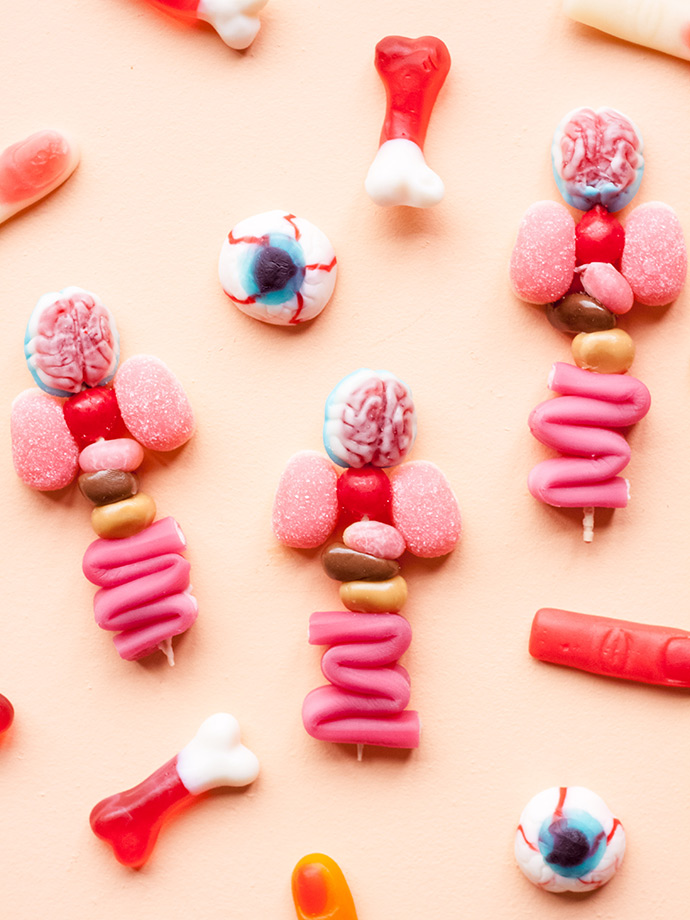 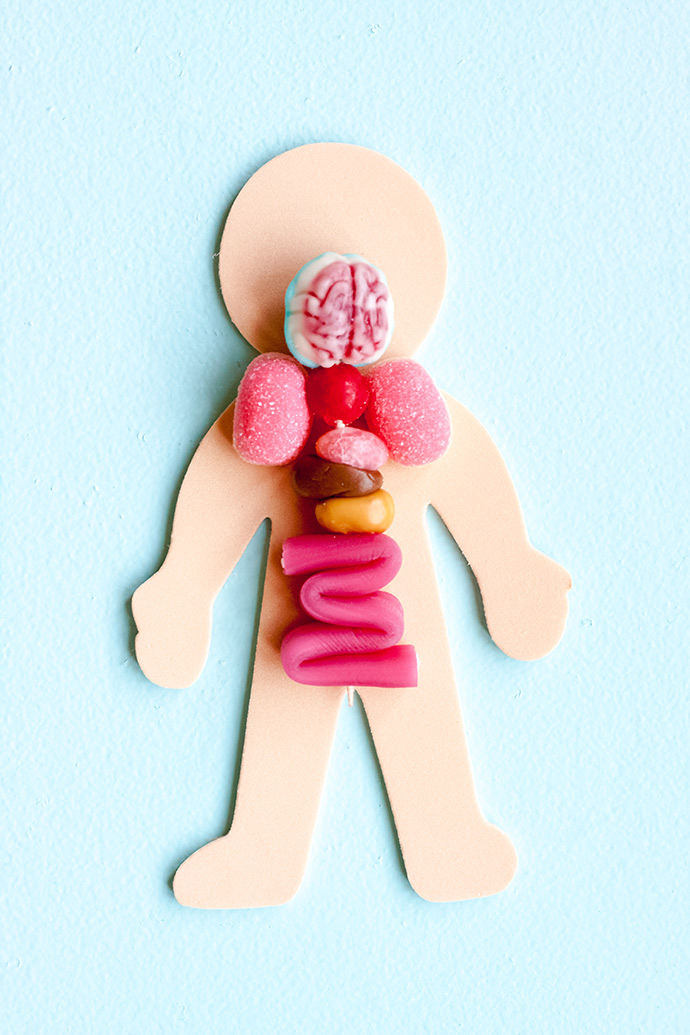 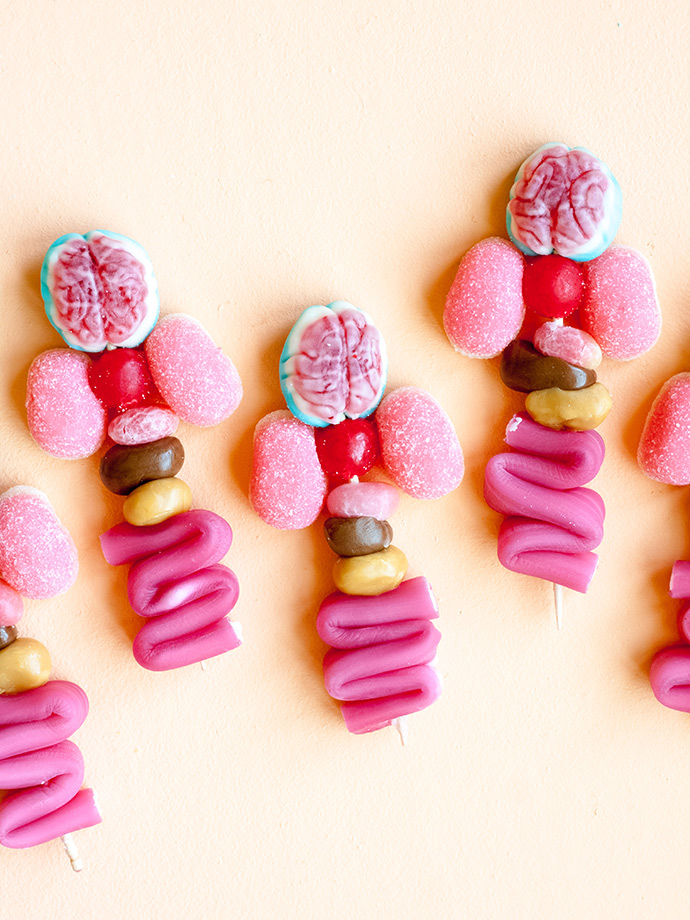 Your organ pops are ready for a taste test! Happy Halloween!!! 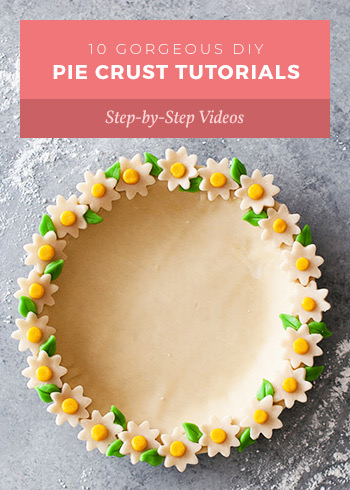