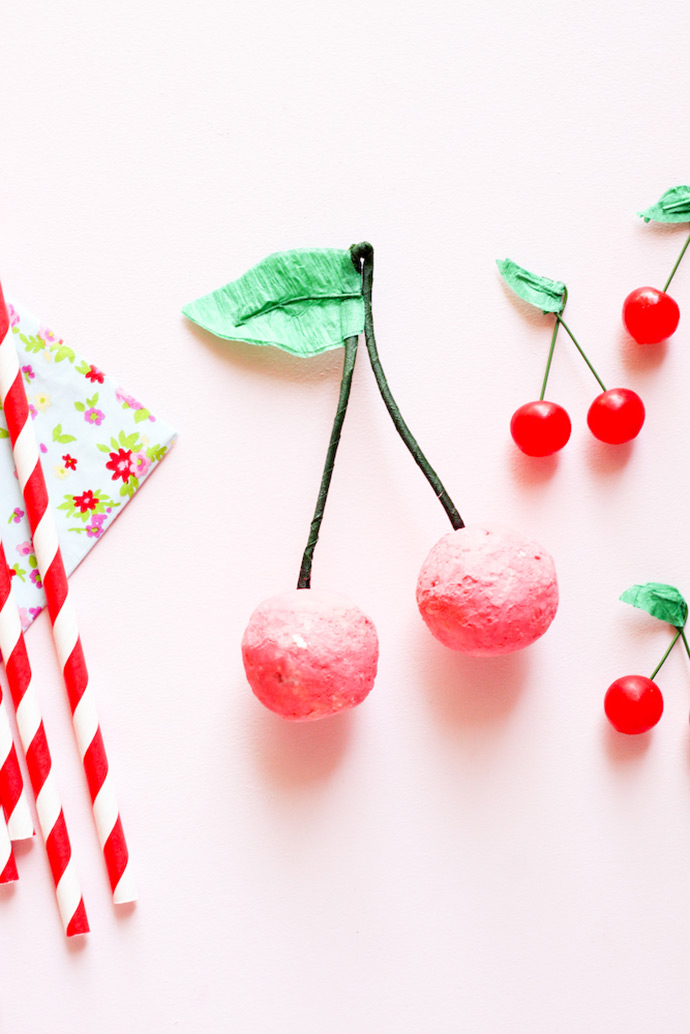 Just the other day, my husband and I were talking about what we imagine ourselves doing when we’re retired. I guess that’s an odd discussion to have thirty-plus years in advance, but that’s what happens when you’re on a four-hour road trip! One of the items on our retirement “bucket list” is definitely picnicking. You’re never too old to pack a lunch, and head to the park to feed some ducks! 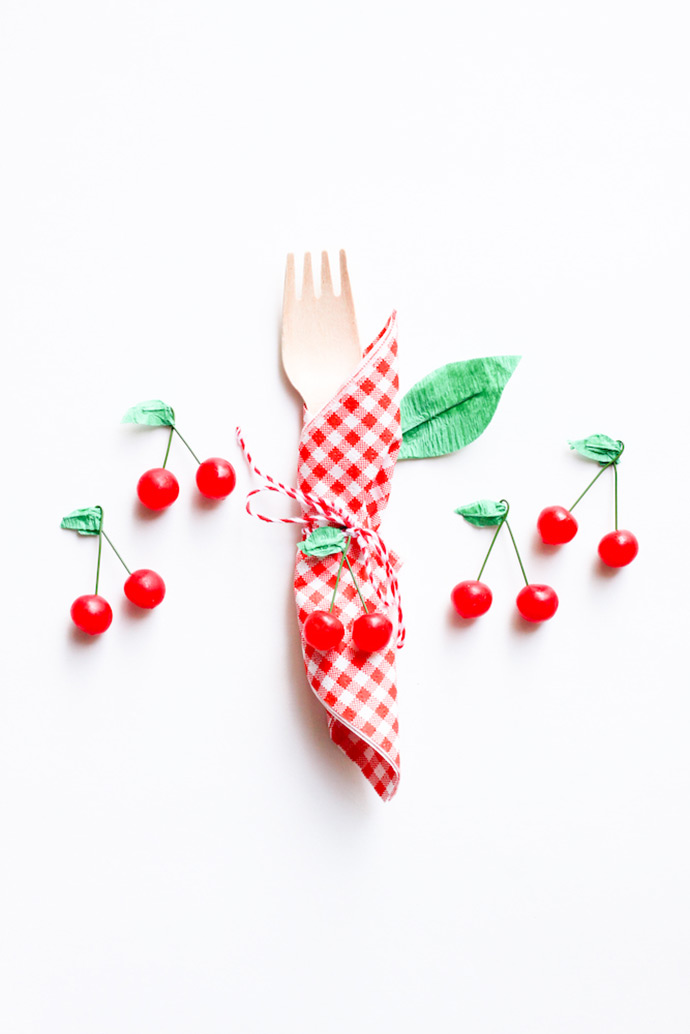 Do you have a favorite picnic food? Cherries are definitely at the top of my list! Since I have a gigantic sweet tooth, donuts and sour candies that look like cherries would be even better! These sweet cherries are perfect as dessert or party favor at any summer gathering, or even for the Fourth of July. They would be cute cupcake toppers too! Or tie them around napkins and favor bags! I couldn’t decide between donuts and candy, so why not make both? Let’s get started! 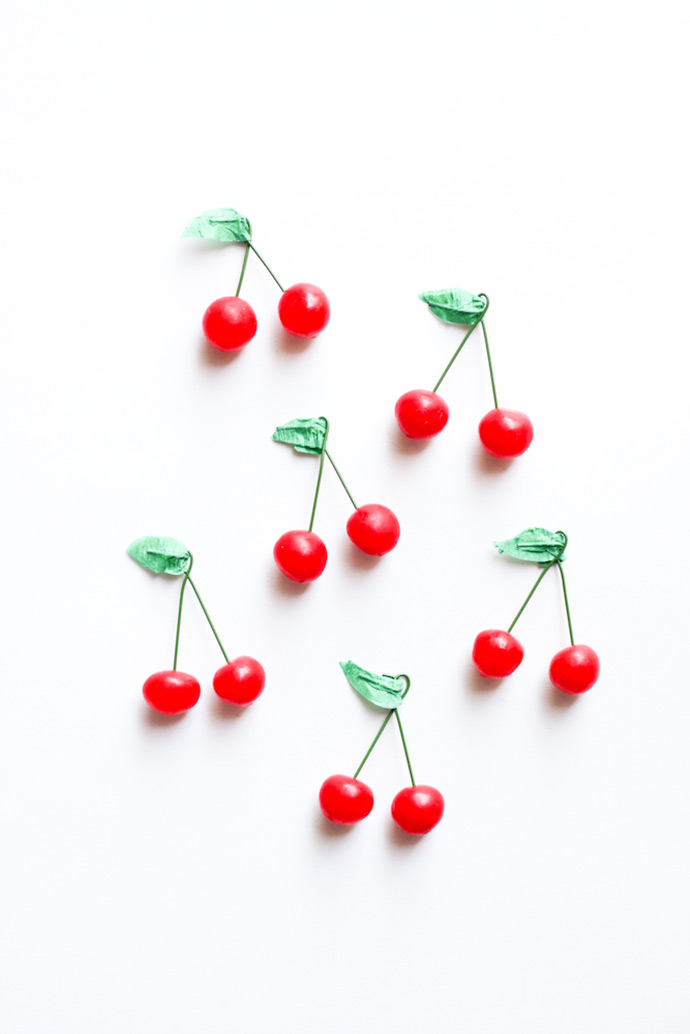 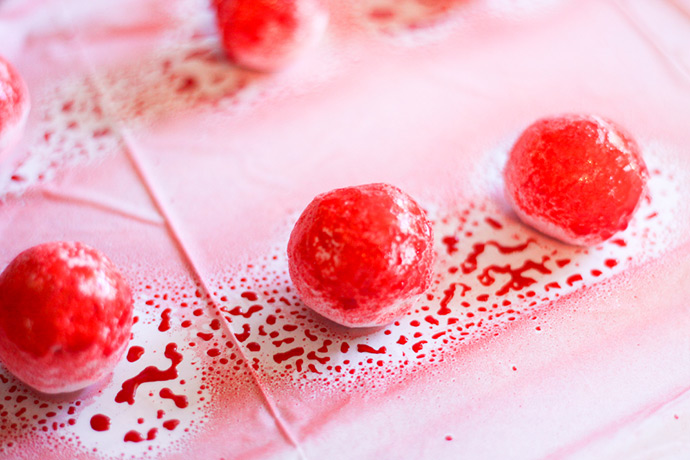 Step 1
First, we’ll create donut cherries. Place your powdered donuts on a surface that you won’t mind getting wet with red food color spray. I used a clean plastic sheet. Following the directions on the bottle, spray the donuts with a thin layer of food color spray. Continue to add layers of spray, until the visible parts of each donut are completely red. Once they’re dry, flip them over to spray the bottom part red, and allow them to dry. You may want to do a touch-up spray at the end. 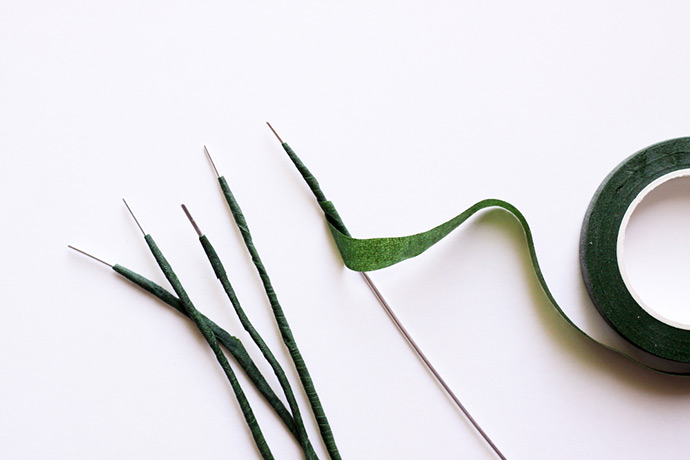 Step 2
Using wire cutters, cut an 8 ½” piece of 16 GA aluminum wire. Leaving about ½” of exposed wire on each end, wrap the rest of it in green floral tape. Start ½” from one end, and wrap horizontally, until the majority of the wire is covered. Press the tape together to make sure it stays in place and sticks securely to the wire. 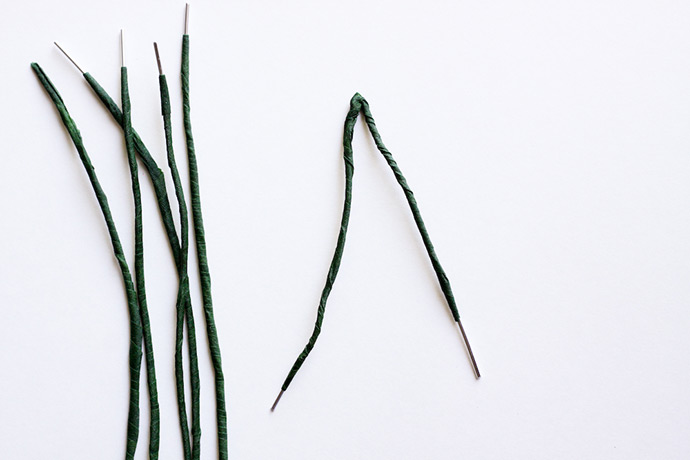 Step 3
Bend the covered wire directly in half, and pull it back apart at the bottom, until you have two sides of a triangle. Squeeze the top of the triangle close together, so that about an inch of the top is skinny. Curve one side of the wire inward, as seen in the photo. 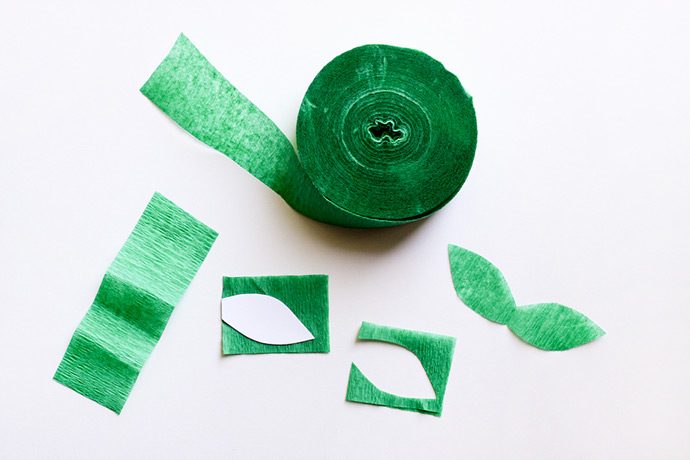 Step 4
To create a leaf, cut a 1 ¾” piece of floral wire. Set it aside, and create a leaf template using a pencil and cardstock. You can freehand a leaf, or print a template from the web. I made my leaves about 2 ½” long. Create your template with one flat end, about ½” long.

Fold a 5-6” piece of green streamer in half. Place the flat end of your leaf template on the folded edge of the streamer, and begin tracing. Cut the leaf out, without cutting the folded edge. When you’re done, you should have two identical leaves still attached at one end. 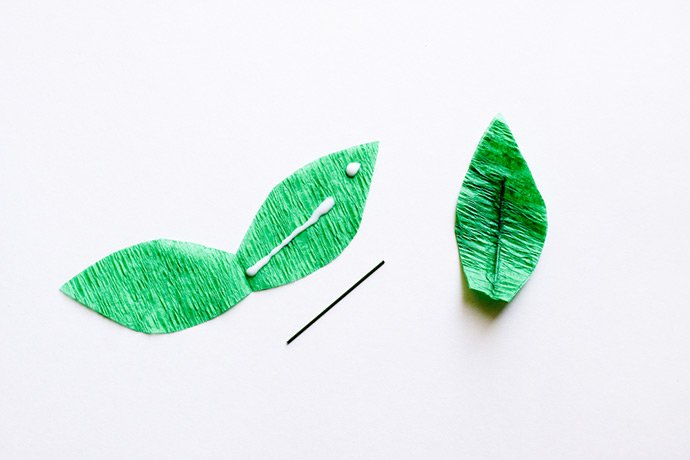 Step 5
Place a strip of glue in the middle of the leaf, starting at the folded edge, and working toward the tip of the leaf. Make the line of Mod Podge about 1 ¾” long, and add a dot  near the tip of the leaf as well. Place the piece of floral wire that you cut in step 4 on the strip of glue, with one end touching the fold. Fold the other leaf half directly on top of the wire and Mod Podge, and press together. Allow the Mod Podge to dry, and bend the wire in the leaf a bit, to create a little curve. 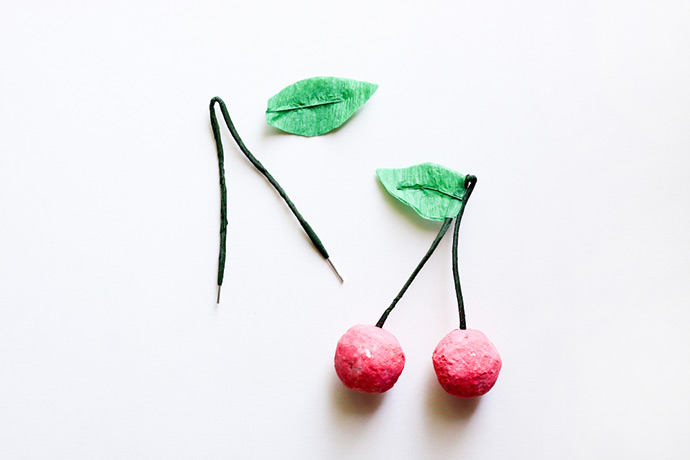 Step 6
Wrap the straight end of the leaf around the top of your cherry stem, and use some small pliers to squeeze the wire together, so that the leaf stays in place. Now stick a red donut hole on each end of the wire, and your donut cherry is complete!

Now for the cherry candies: 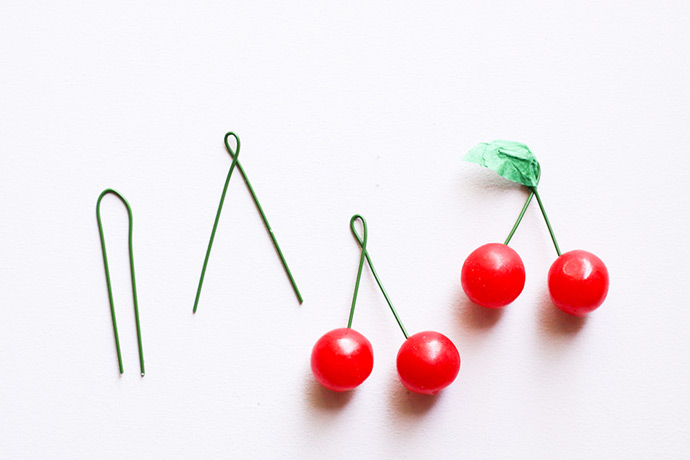 Step 1
Cut a 3 ¼” piece of floral wire, and fold it in half by crossing one half over the other, leaving a tiny loop at the top. 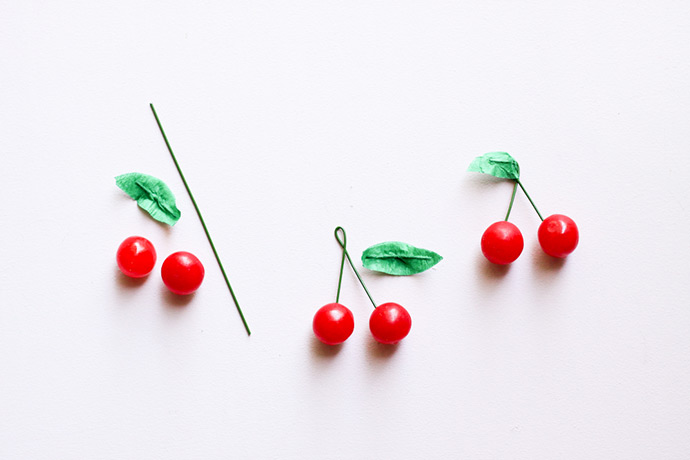 Step 2
To make the leaf, follow the directions in steps 4 and 5 above, only using smaller dimensions. The wire will be a little less than an inch long, and the leaf template should be slightly longer than the wire. The streamer piece can be about 3” long. Make the glue strip less than an inch long. Basically, create a miniature version of the leaf above.

Step 3
Wrap the straight edge of the leaf around the loop of the stem, and use the small pliers to squeeze the wire tightly together to keep it in place. Stick a cherry sour candy on each end of the wire, and you have your mini cherries! 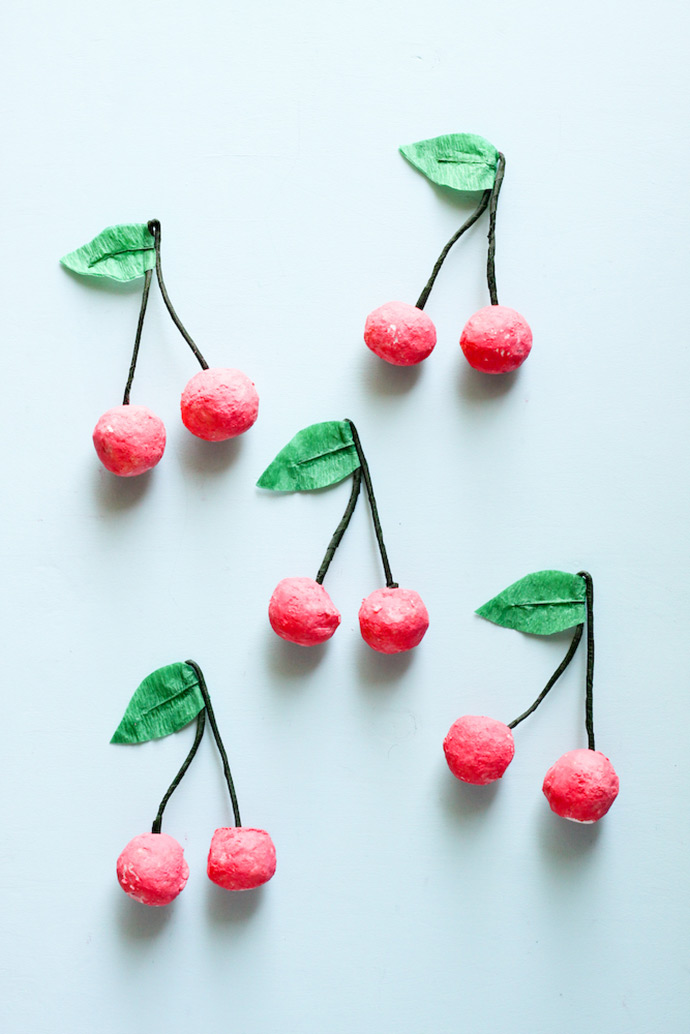 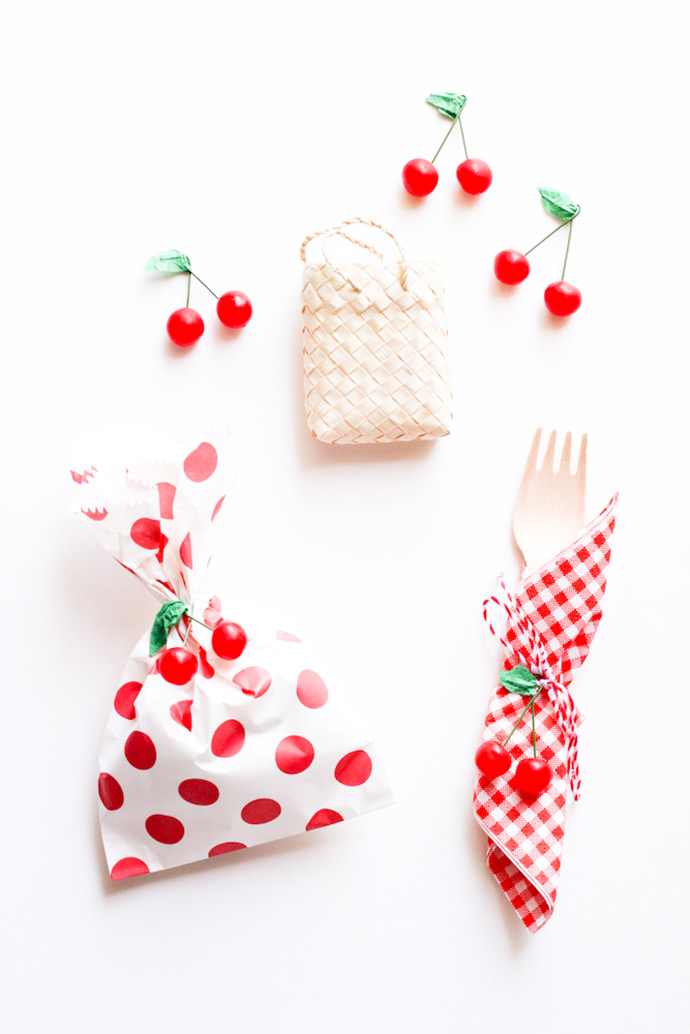 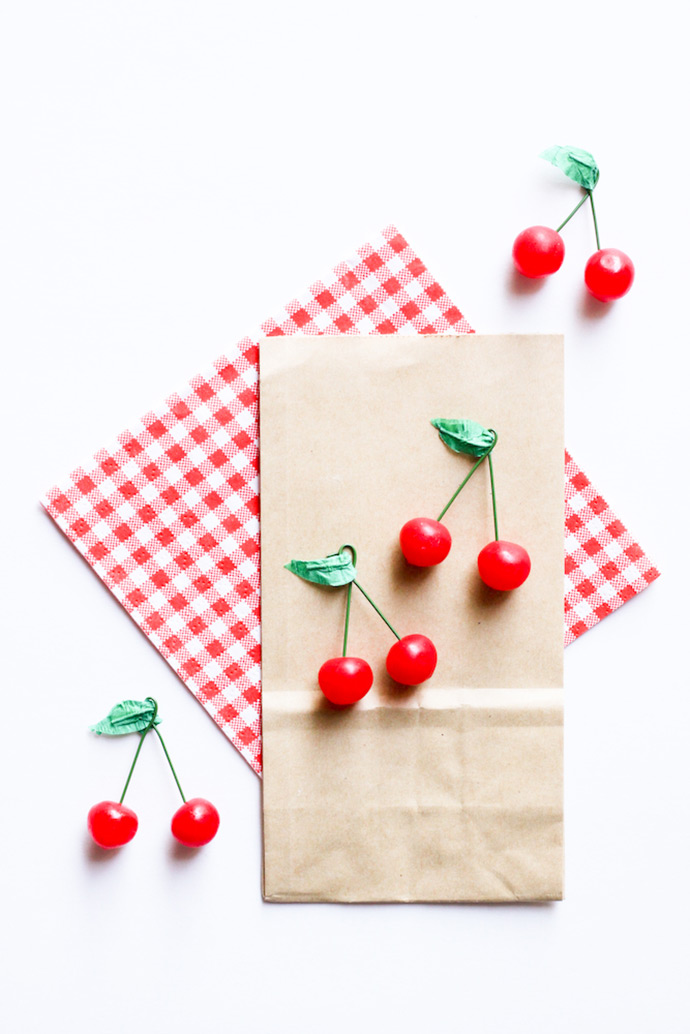 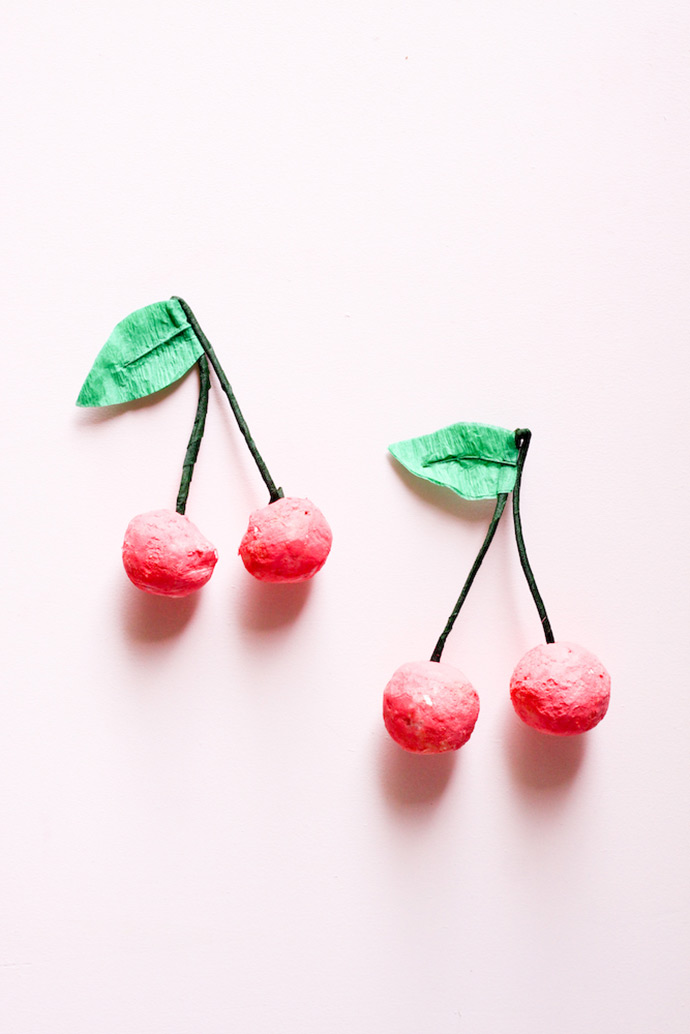