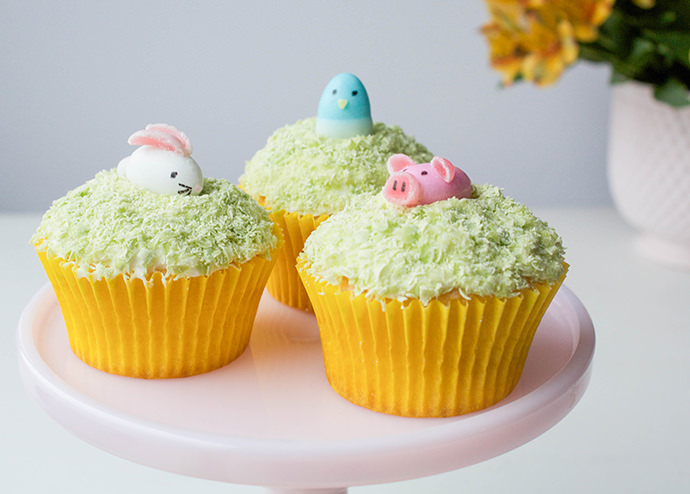 I feel like all I’ve been writing about lately is how I can’t wait for Spring to come! I can’t help it. It’s the truth! No matter where you are or what your weather’s been like, I think we can all agree that this year (more than ever) Spring will bring some welcome changes! 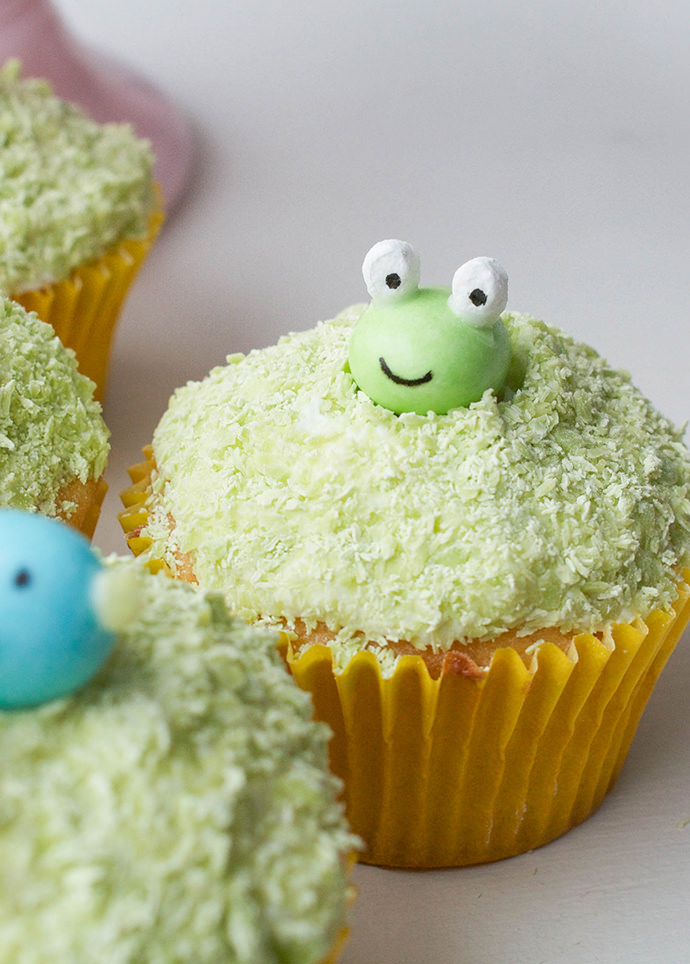 One sure sign that winter is at an end is the arrival of Easter candy to store shelves. Specifically, Jordan almonds and jelly beans. I mean, does anything say “spring” more than those two candies? I’ve combined them in this project to create a little cupcake farm of baby animals. Babies – another sign of spring! These little critters would work perfectly for an Easter brunch or any other springtime celebration. They’re sure to bring a smile to everyone’s face! 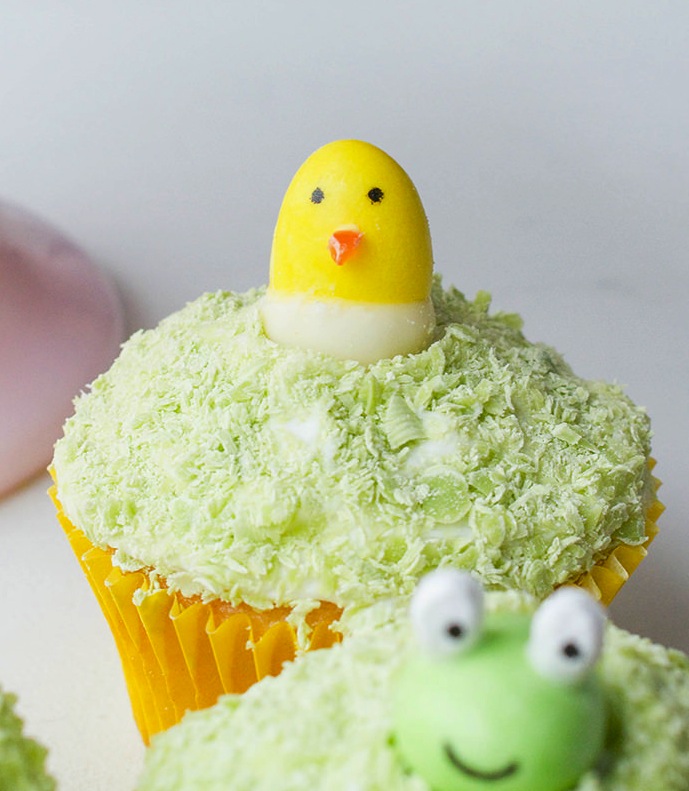 I wrote the directions according to the colors of almonds and jelly beans I could find, but get creative with what’s available to you. Mix and match colors to create even more little critters! 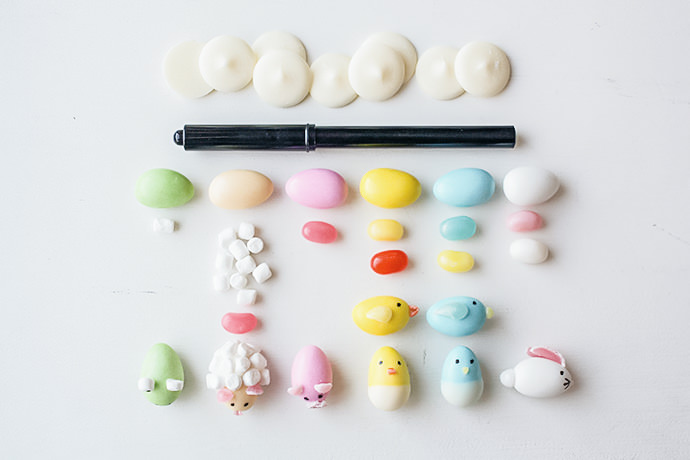 For all the animals, the candy melts will be used to help adhere the jelly bean pieces if they aren’t sticking well enough on their own. 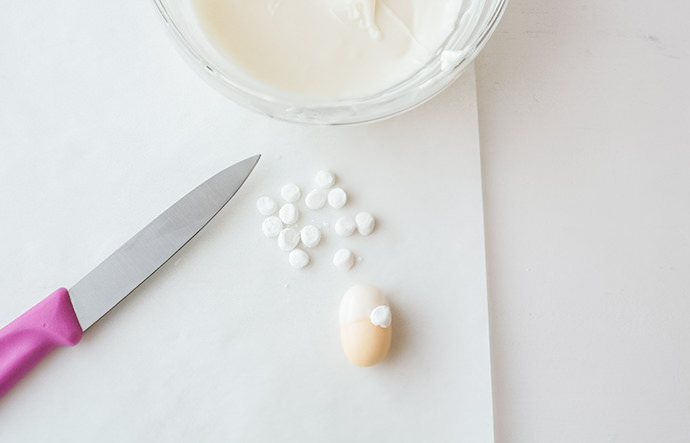 Melt the white candy melts in the microwave or in a double boiler. Cut about 6 tiny marshmallows in half. You may need more or less, depending on the size of your almonds. Dip a beige almond into the melty candy mix, so that approximately 3/4 of the almond is coated. 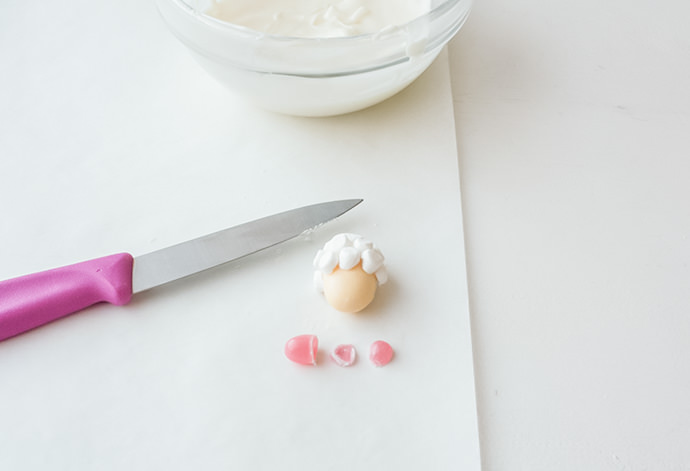 Stick the cut marshmallows onto the almond while the candy melts are still wet. Trim the end off of a pink jelly bean. 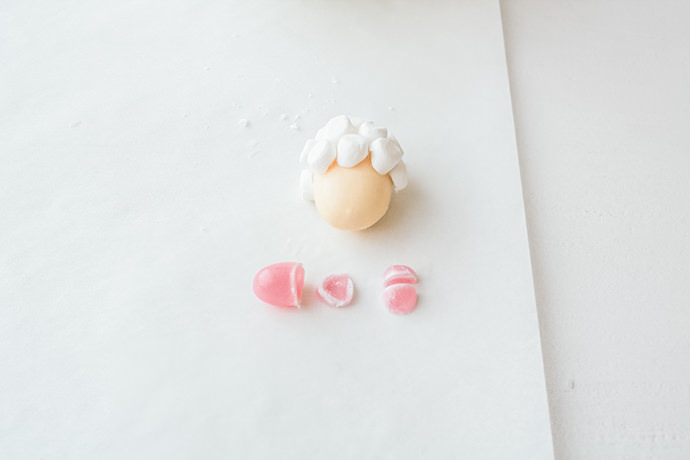 Cut that end piece in half. Place the pieces onto the almond, sticky side out, to create the lamb’s ears. 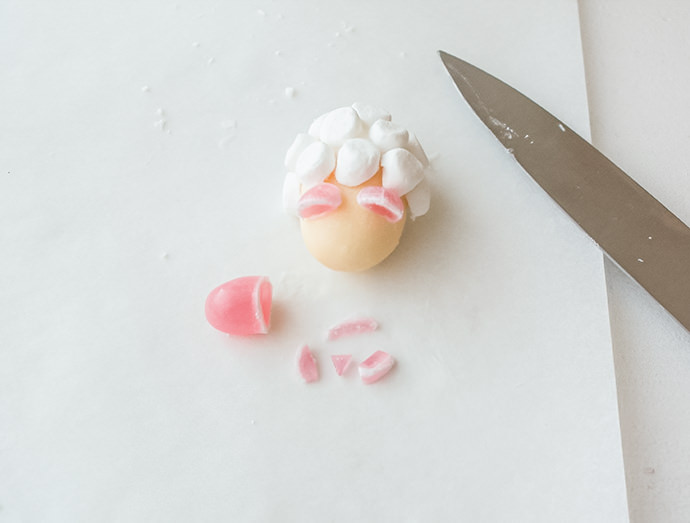 Cut a small triangle of pink jelly bean to use as the lamb’s nose. Again, use the melty candy mix to help adhere the jelly bean pieces if they aren’t sticking well enough on their own. 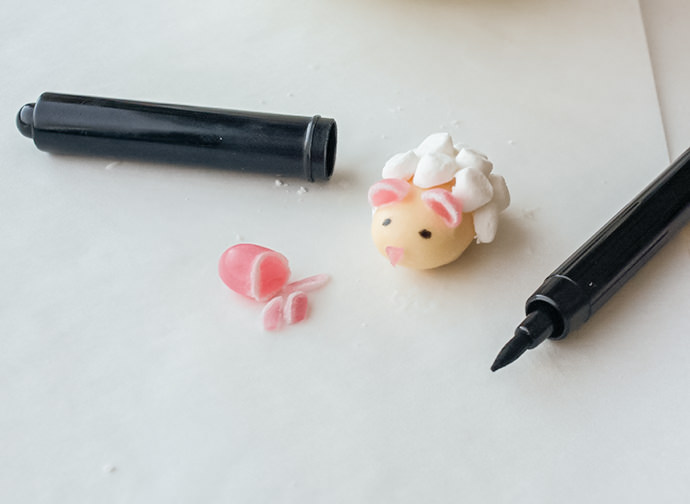 How-To: Chick In An Egg 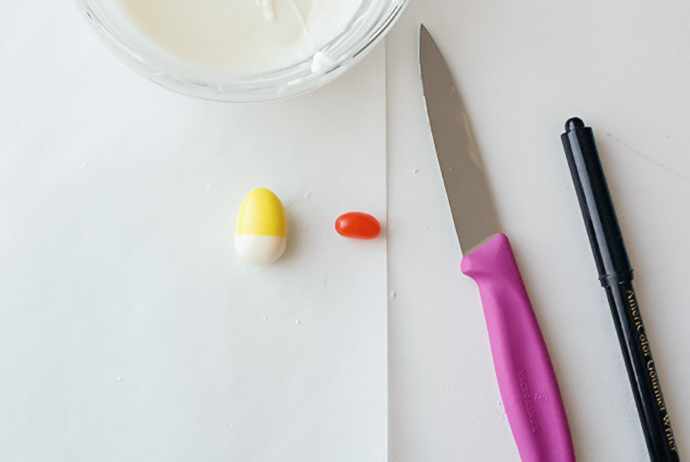 Dip the fat end of a yellow or blue almond into the white candy melts. 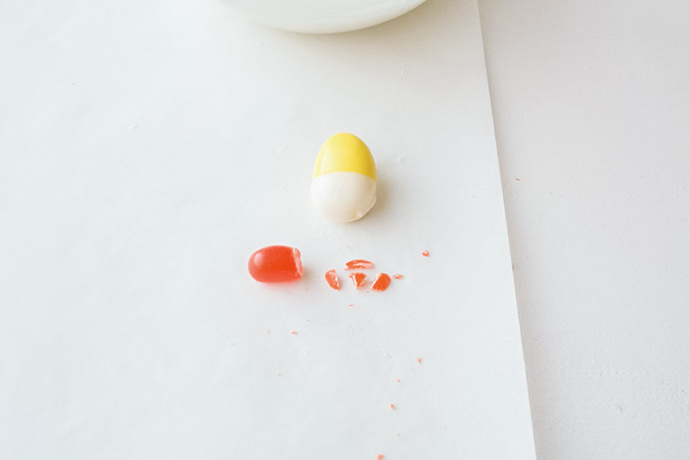 Trim off the end of an orange or yellow jelly bean and cut out a small triangle. This will be the bird’s beak. 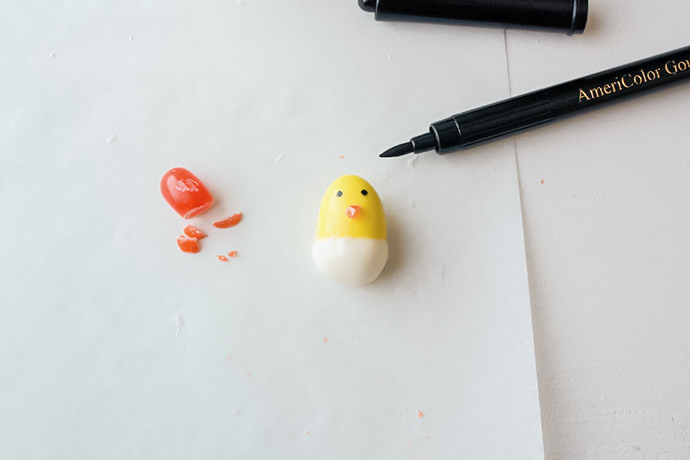 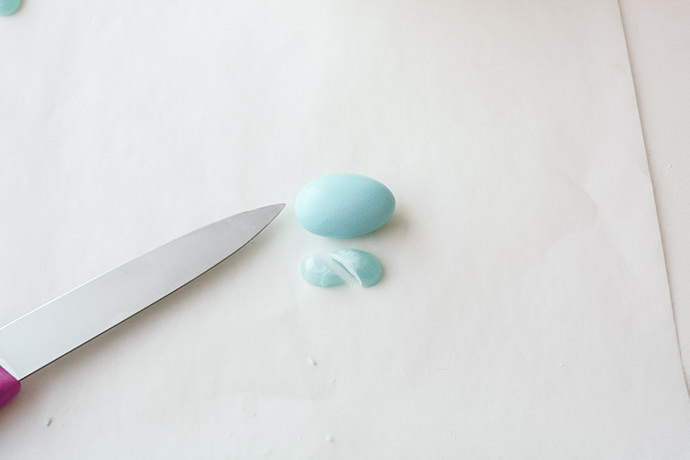 Pick out a blue candy almond. Cut a yellow or blue jelly bean in half length-wise. Trim off the ends of each half on a diagonal. 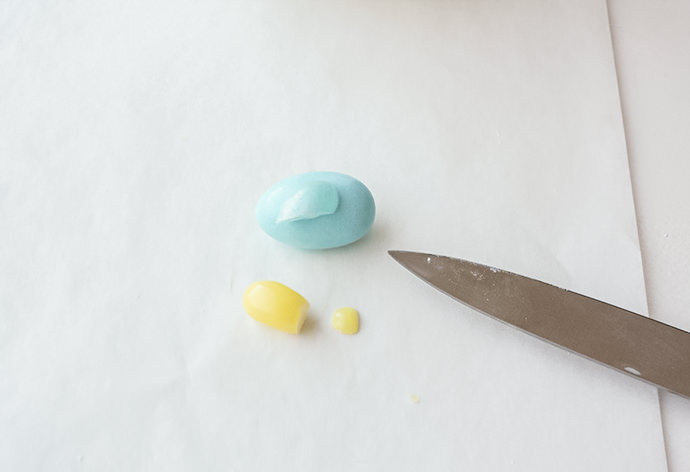 Place the cut jelly bean pieces onto the almond, sticky side down, to form the chickie’s wings. 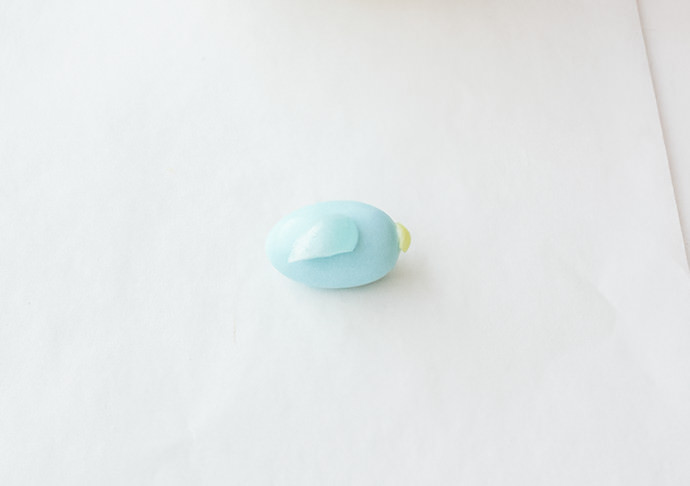 Trim off a small piece of orange or yellow jelly bean to use as the chickie’s beak. Stick it on using the candy melt. 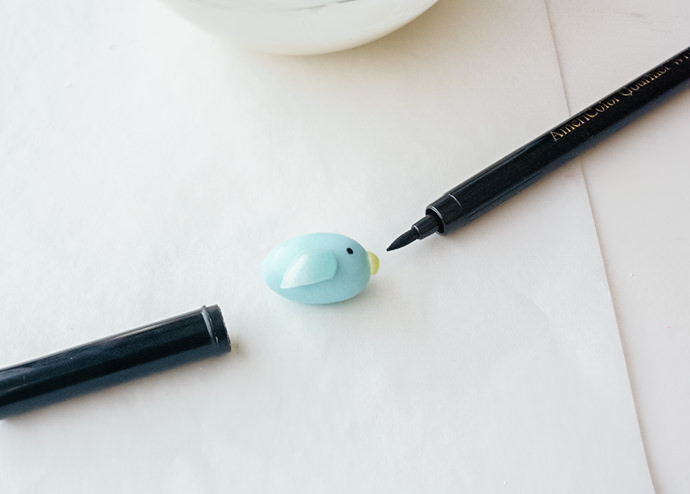 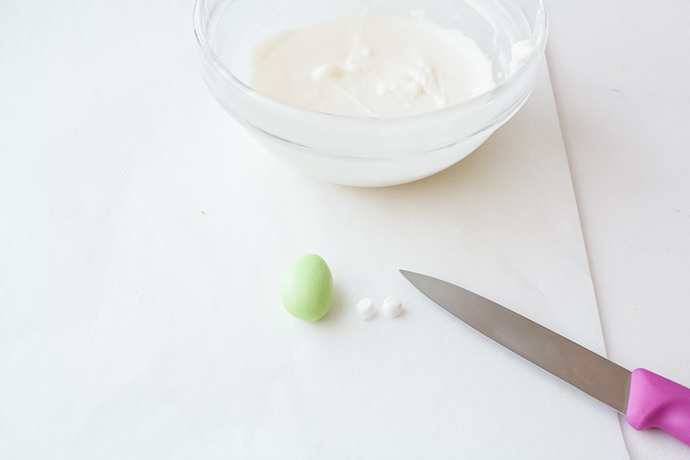 Dip the rounded side of a mini-marshmallow into white candy melts and place it onto the fat end of a green almond, flat side facing out. 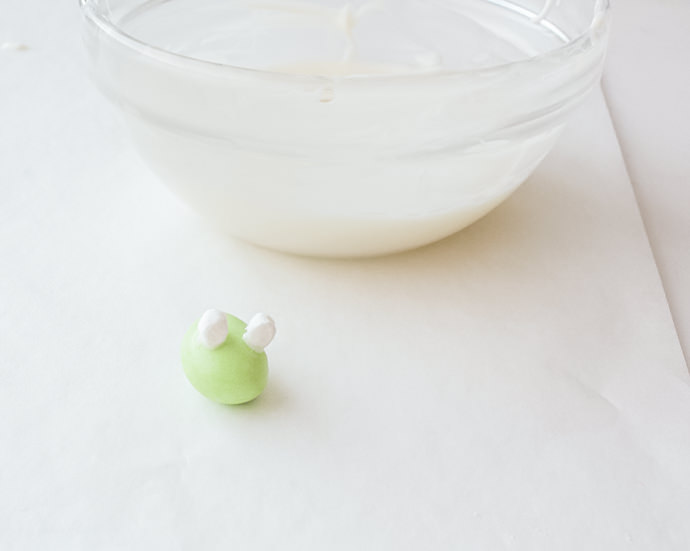 Repeat with a second mini-marshmallow. These will be the eyes. 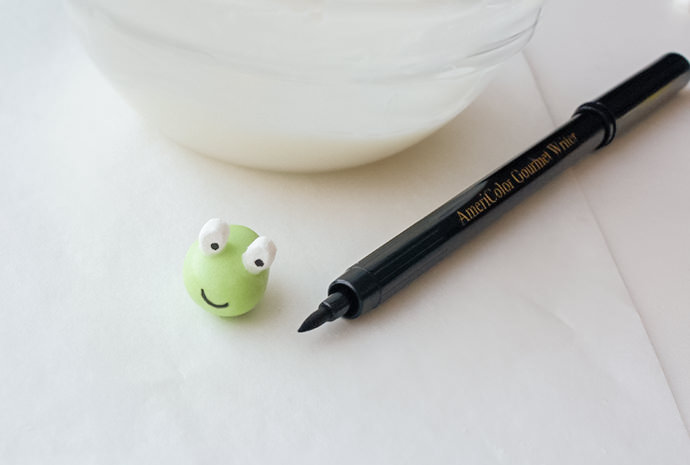 Draw on the frog’s eyeballs and smile using a black food color pen. 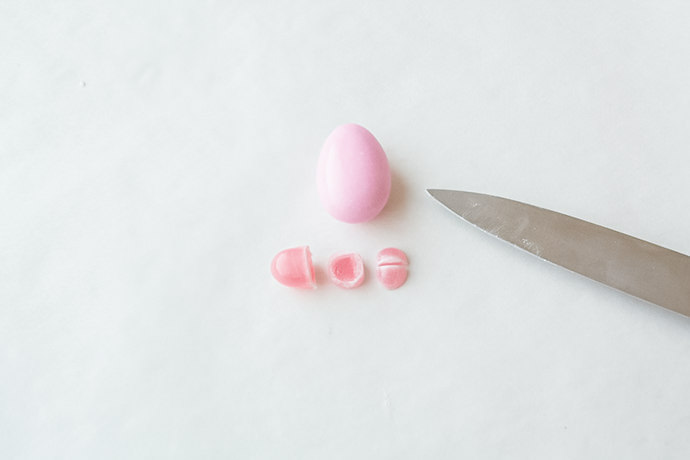 Cut the end off of a pink jelly bean. Cut that small piece in half again to make the pig’s ears. Stick them onto the end of a pink almond, sticky side in or out. Both ways look cute! 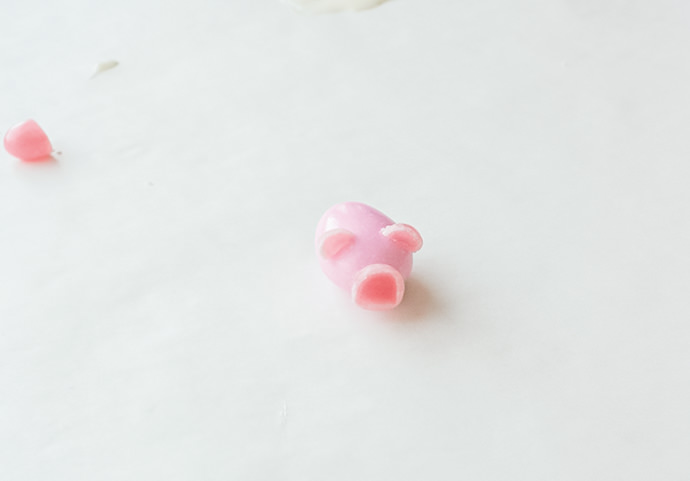 Cut a piece from the middle of the pink jelly bean. Stick that circle onto the end of the pink almond to make the pig’s nose. 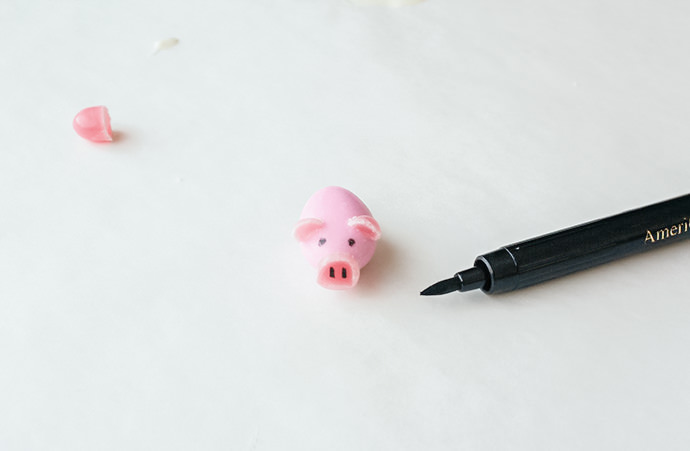 Draw on the pig’s nostrils and eyes with a black food color pen. 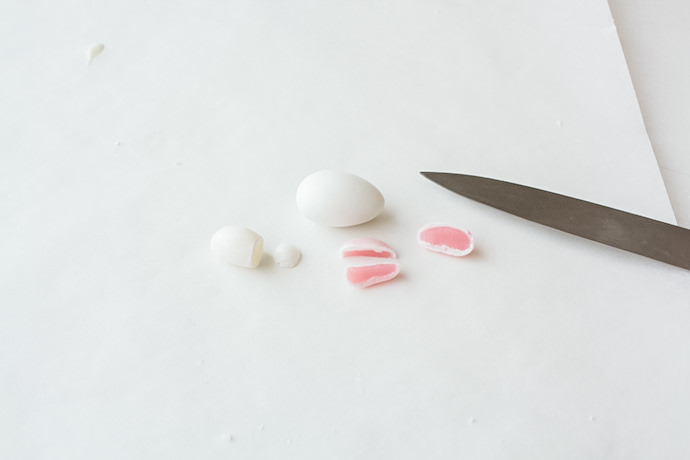 Cut a pink jelly bean in half length-wise. 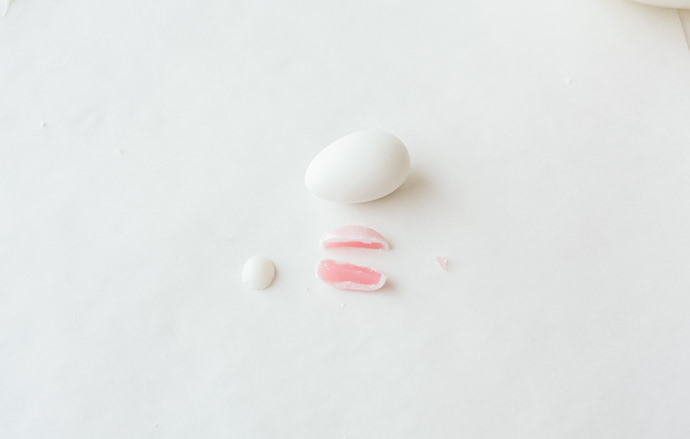 Cut one of the sides in half again, so that you have two long bunny ears. Stick them onto the top edge of a white almond. 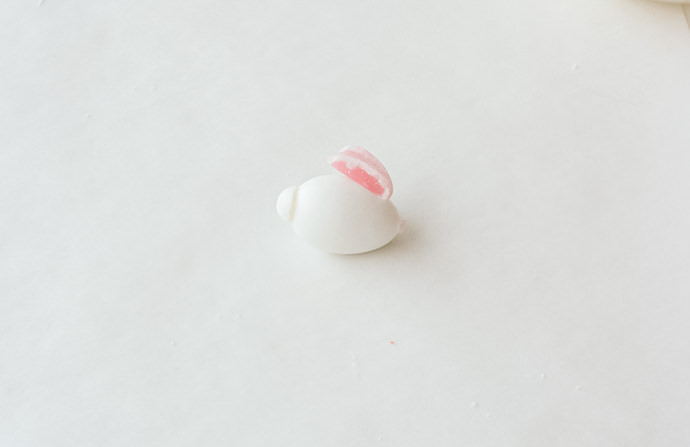 Cut a small triangle from the leftover pink jelly bean for the bunny’s nose. 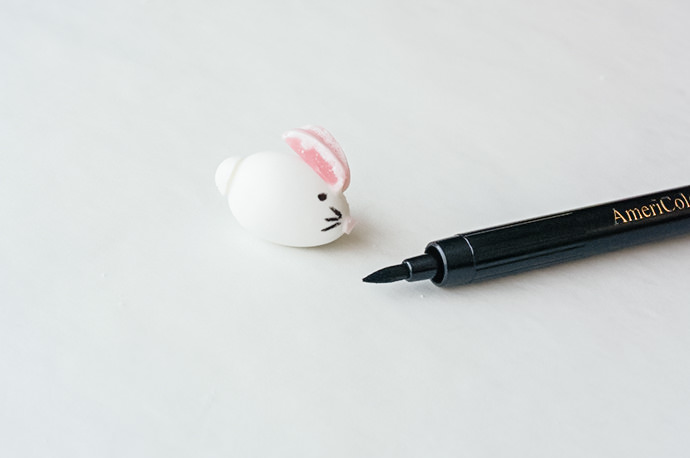 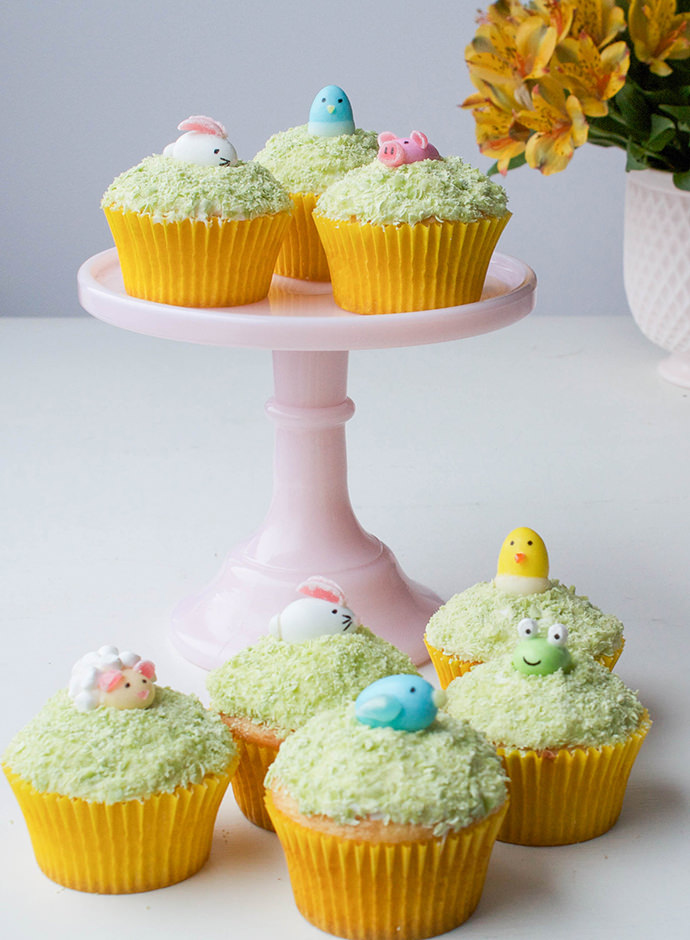 I used my candy animals as toppers for cupcakes finished with shredded green candy melt “grass”. They’d also be adorable on a barnyard themed cake or even just in a bowl on their own!