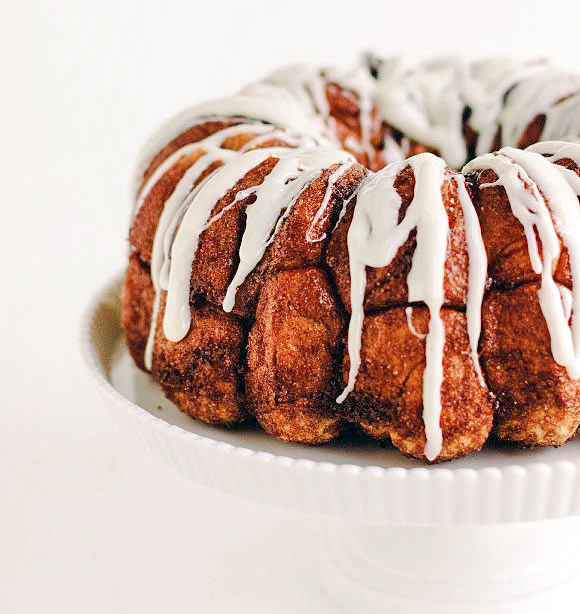 Breakfast during the week is a simple affair around our house. We usually stick with favorite cereals, or yogurt and granola if things get fancy. When the weekend comes, however, we like to break our routine, and waffles, pancakes, or Dutch babies are often found on our table.

Monkey bread is a new addition to our weekend eating—it’s so easy to make and terribly delicious. My children named it “cinnamon roll cake” the first time we flipped the Bundt pan onto a platter, and the name has stuck. Because who doesn’t want to eat cake for breakfast? 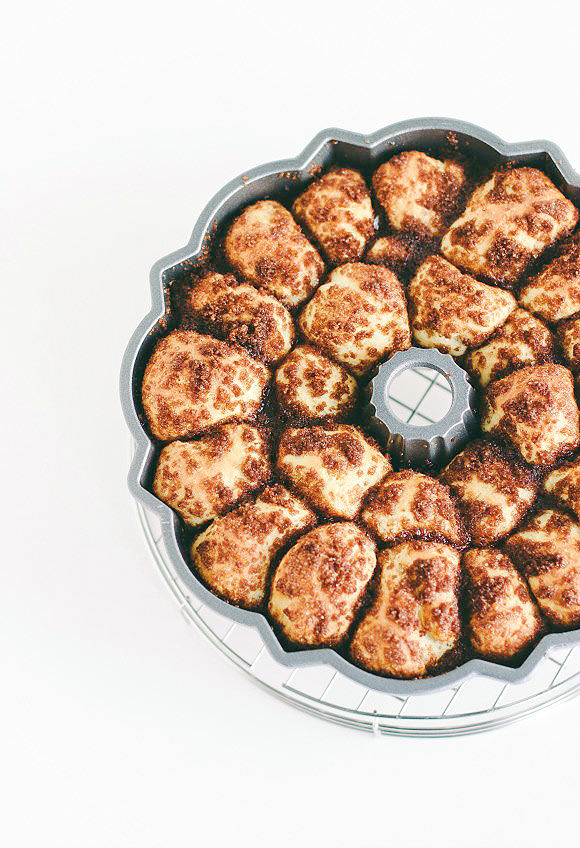 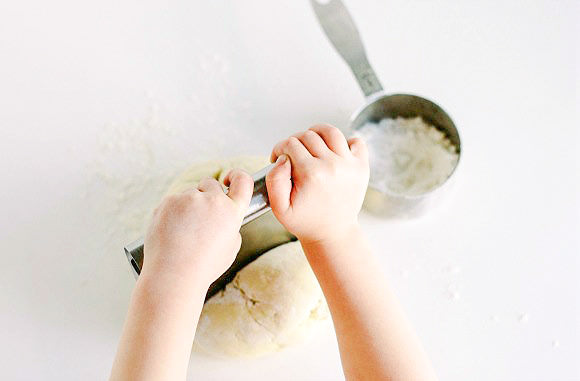 I used Bread in Five’s brioche dough—I like this dough because it can be made up to a week ahead of time, so it’s very convenient. I used 2 pounds of dough for this recipe. The rest of this recipe is adapted slightly from America’s Test Kitchen. I used organic brown sugar, which is usually much coarser than regular brown sugar. This caused the sugar coating to be less caramel-y than it should have been, and while it still tasted delicious, I’d recommend using a finer brown sugar here.

The monkey bread can be assembled the night before; follow the directions up until placing the dough balls into the Bundt pan, but do not let it rise. Cover with wrap and refrigerate the pan overnight. Pull the pan out of the fridge the next morning, and let the dough rise at room temperature until it has doubled in size, about 1 hour. Then bake as directed. 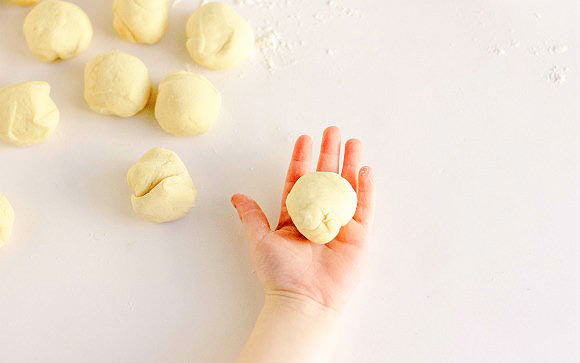 Step 1
Grease a 12-cup nonstick Bundt pan. Mix the brown sugar, cinnamon, and salt together in a bowl. Set aside. 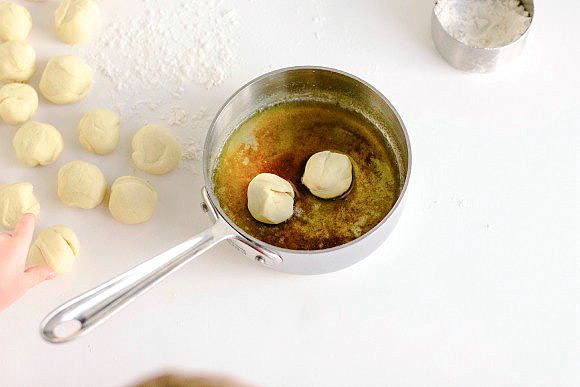 Step 2
Put the dough on your workspace and cut it into 36 pieces. Cover the dough with a towel or plastic wrap. Roll the dough into balls. Roll the balls (a few at a time) in the melted butter, and then in the cinnamon-sugar mixture. Arrange the balls evenly into the Bundt pan. Sprinkle any left over butter and sugar over the top of the dough balls, and then cover the pan tightly with plastic wrap. Let rise in a warm place until doubled in size, 1 to 1½ hours. 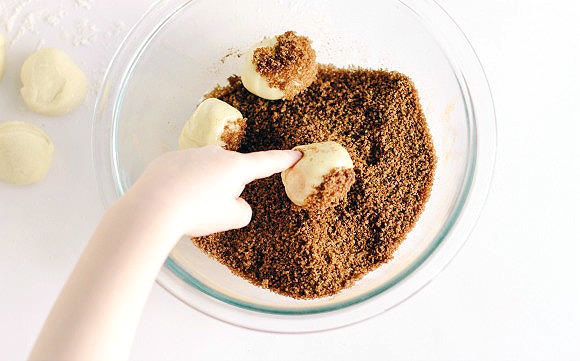 Step 3
Adjust the oven rack to the middle position and preheat the oven to 350. When the dough has risen, bake the monkey bread until the caramel begins to bubble around the sides and the top is golden brown, 30-40 minutes. Place the monkey bread on a wire rack and let cool in the pan for 5 minutes. Gently turn out the bread onto a serving platter, and let cool slightly, about 5 minutes. 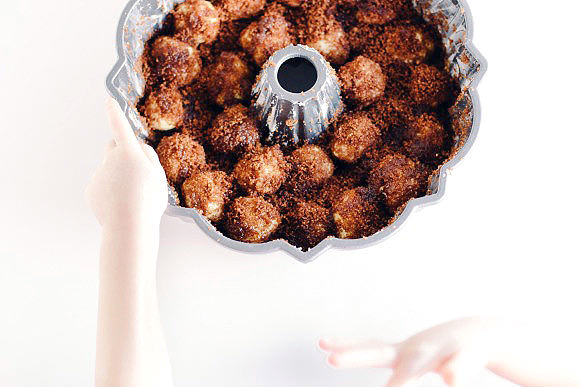 Step 4
To make the glaze, whisk together the cream cheese and 2 tablespoons of milk in a bowl until smooth. Add the vanilla and salt, and mix until combined. Add the powdered sugar and whisk it into the cream cheese mixture. Add 1 tablespoon of milk at a time until glaze reaches a “drizzling” consistency and is smooth (2 or 3 tablespoons more). 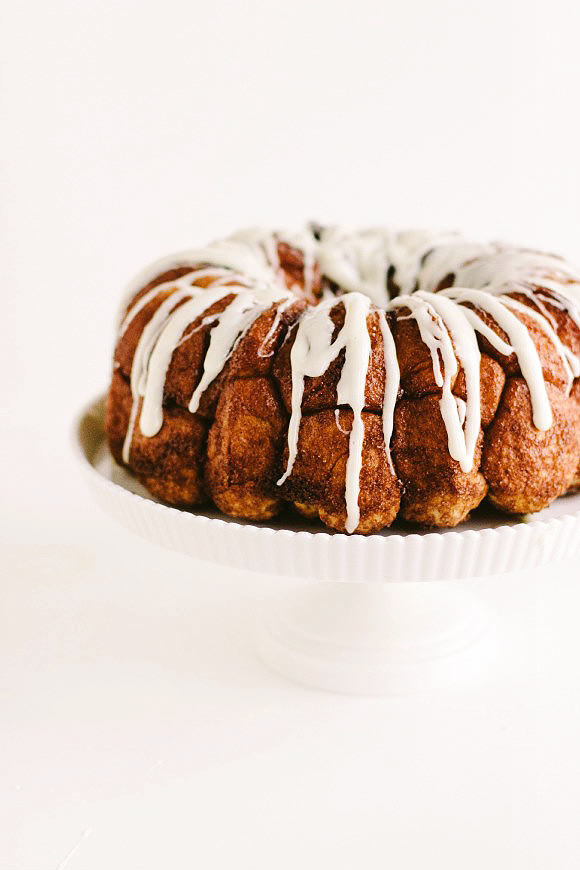 Drizzle the bread with glaze and serve warm.